There have been literally several responses to my blogging about the semiotics of the fork.

“Margihealing” commented, “I lived part of my childhood in Papua-New Guinea - unfortunately too young to observe sago-forked and other mating rituals.  Nevertheless, the fabulous 1970s-80s mating ritual of the middle-class Australian wedding was often represented by the gifting of at least one box of Splayds. You want them. You need them.  Damn. I left them with my husband when I left him.” 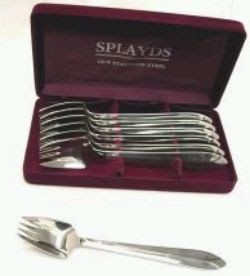 Australian mating rituals are obviously a law unto themselves, and I admit I’d never heard of a Splyad, but the latter at least is now rectified.

The Splayd, it turns out, is an Australian “multipurpose eating tool,” the invention of one William McArthur, combining the features and functions of knife, fork and spoon. From 1943 onwards McArthur’s wife Suzanne used and sold them at the Martha Washington Café in Sydney. In 1960 she sold the design to the tableware manufacturer Stokes and they went into mass production. 800 million have now been sold, apparently, and it seems the trademark word has become a generic term.

Splayd.com says they “make for the easy eating experience. Everyone who uses them loves their sturdy and special design.” 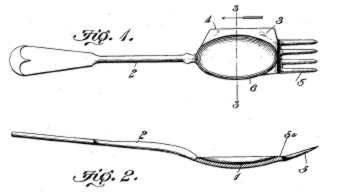 Well I had actually heard of the spork, which combines the spoon and the fork, so I suppose it could have been called a Foon, and again, although it’s used as a generic term it turns out that patents for the combined spoon and fork go back to the late 19th century and it was a registered trademark in England and America at that time. 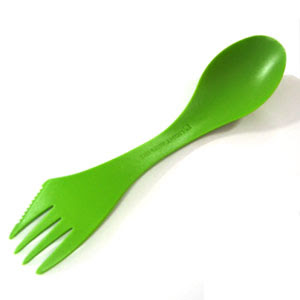 Recently it seems that cutting edge designers have started to embrace the spork - the Japanese seem especially keen. Above is something called the “Light My Fire Spork” by Swedish designer Joachim Nordwall, which actually puts fork and spoon at different ends of the utensil, so that presumably you get food all over your hand when you move from one to the other. 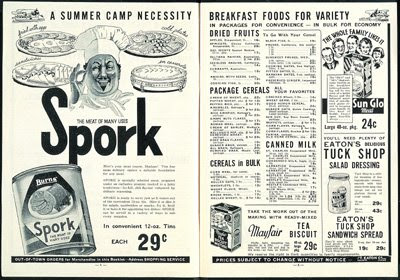 Spork is also, I discover, out a kind of canned meat, its name obviously inspired by Spam – spice pork instead of spiced ham. I can see how this might create problems in certain situations, “Honey, pass the spork,” "That spork hit me in the eye," etc
Posted by GeoffNIcholson at 3:38 PM