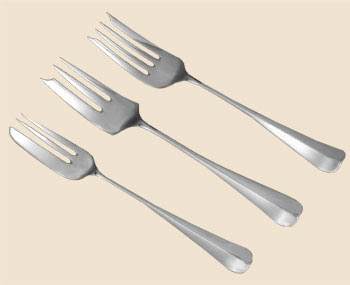 When I first got together with the Loved One she came to my apartment in London and I cooked for her. She offered to set the table and I said sure and she got out some cutlery and when I looked at what she’d laid out I said, “But honey, those are pastry forks!”

A pastry fork has a blunt blade down one side (for slicing rather than actually cutting) and tines for stabbing. See above.

She thought I was either insane or an aesthete, or both. She claimed, and I had to believe her, that she’d never seen a pastry fork and didn’t know what one was. More to the point, I think she didn’t see why a real man would even own pastry forks.

The last part is easily explained. I grew up in Sheffield, in northern England, a city that is famous for making steel and cutlery. There’s a reference in Mark Twain. My parents never actually worked in steel mills or cutlery factories but we had plenty of friends and relatives who did. All the time I was growing up sets of cutlery would arrive at the house, “gifts” from cutlery workers. These hadn’t exactly fallen off the back of trucks because most of them had never even made it onto the backs of trucks. People who worked in cutlery factories stole them because ... because they just did. 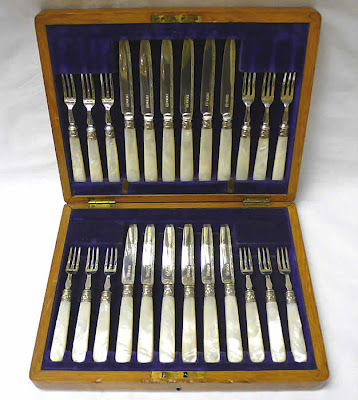 Consequently every household you ever went into in Sheffield had far more cutlery than it could ever possibly use. And after my parents died and it was my job to clear their house I found literally hundreds of knives, forks and spoons, including of course pastry forks; most of which had never been used.

At that point in my life I was a grown man with a life and household of my own. I thought I had all the cutlery I needed; but I didn’t have any pastry forks. So, as I got rid of all my parents’ redundant I kept a few pastry forks, a practical reminder of my mom and dad, which was why they were there in my apartment in London.

Now frankly I’ve never quite understood why the Loved One couldn’t tell that the forks she laid out weren’t your average fork. They had a blunt blade as well as tines. Surely you’d have noticed. But obviously she didn’t. So. Anyway ... 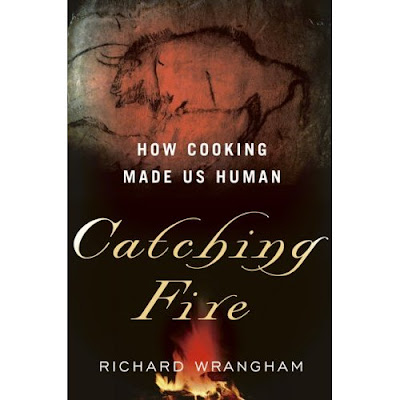 Lately I’ve been reading a book by Richard Wrangham called “Catching Fire: How Cooking Made us Human” which among many other truly amazing topics discusses food and mating rituals among the Bonerif hunter-gatherers of New Guinea. Wrangham tells us that the sago palm is the year-round staple food of the Bonerif, and if a woman makes a sago meal and gives it to a man they’re considered to be married. “The association is so ingrained,” writes Wrangham, “that a man’s penis is symbolized by the sago fork with which he eats his meal. If a man takes his sago fork out of his hair and shows it to a woman, they both know he is inviting her for sex.” 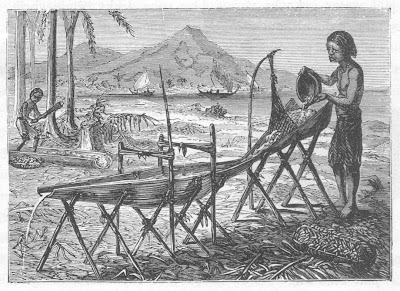 I’ve been thinking about this a lot. And I’m still not sure whether it makes eating and courtship much simpler of infinitely more fraught. I’m fairly sure however, that in the west, wearing a fork in your hair probably isn’t the best way of appealing to women.

I haven't been able to find an image of a sago fork, but below is one of something called a sago club , from Alfred Russel Wallace's "The Malay Archipelago:The land of the orang-utan, and the bird or paradise. A narrative of travel, with sketches of man and nature."

Posted by GeoffNIcholson at 8:57 PM