LAFFS WITH THE LAUREATE

A funny thing. I happened to be near St. Pancras last Sunday.  I was looking for somewhere to eat and have a pint, and there was The Betjeman Arms, inside the station itself.  Pubs on railway stations are always potentially dodgy but invoking the name of the good, late, Sir John seemed somehow promising. 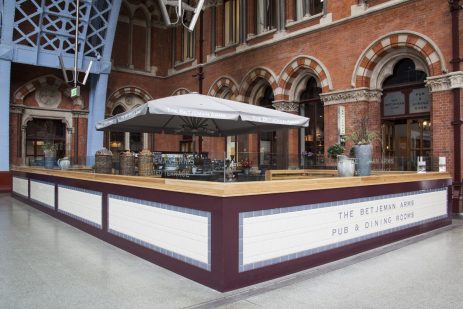 Of course St Pancras is a wonderful structure and the pub, within the old hotel  was wonderfully labyrinthine.  The Betjeman Arms has some (not wholly unreasonable),  aspirations to being a good restaurant: “Wayne, our Head Chef, has cooked up a delicious mix of traditional British favourites and modern classics to tempt you with, all made with the freshest ingredients.”  What could go wrong with ordering a plate of fish and chips.

Once the order had been placed at the bar, I looked for somewhere to sit down, and I spotted a couple of seats next to a wiry, and indeed wired, middle-aged, stubbly-faced bloke in a Sheffield Wednesday sweatshirt.

I make no boasts, but I like to think I can spot trouble at a distance, and this guy looked like trouble.  I found a seat some distance way and waited for the fish and chips to arrive.  And while I was waiting a fight broke out between Mr. Sheffield Wednesday and a big Irish bloke with a hipster beard.  Raised voices, hideous threats and lots of “strong language” ensued, and a guy from behind the bar stepped in and told them to take it outside which they did. Punches were thrown in an uncoordinated way and the Irishman seemed to “win,” at least to the extent that the Sheffield Wednesday bloke slipped away into the tube station.

A few minutes later two police women arrived and took statements from the bar staff and the Irishman who’d returned to the bar after vanquishing his antagonist.  It all seemed strangely amicable but I couldn’t help thinking that Mr. Sheffield Wednesday might have gone elsewhere and started another fight.
But by then the fish and chips had arrived and they were not bad at all.  The mushy peas really weren't very mushy, which seemed a good thing. 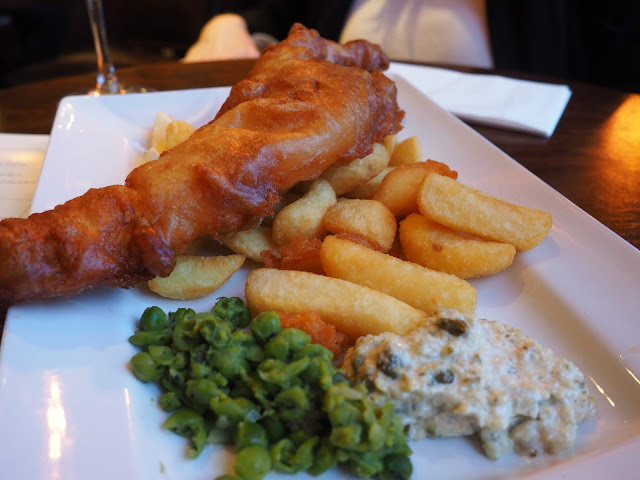 Betjeman, of course, is regarded as the savior of St Pancras station and the adjacent Midland Grand Hotel, built in 1868; architect George Gilbert Scott. The building I was sitting in was first a hotel, then the offices of British Rail who wanted to close and demolish the site, until Betjeman led a very successful campaign to keep it.

At the current Betjeman Arms they even serve Betjeman Ale: 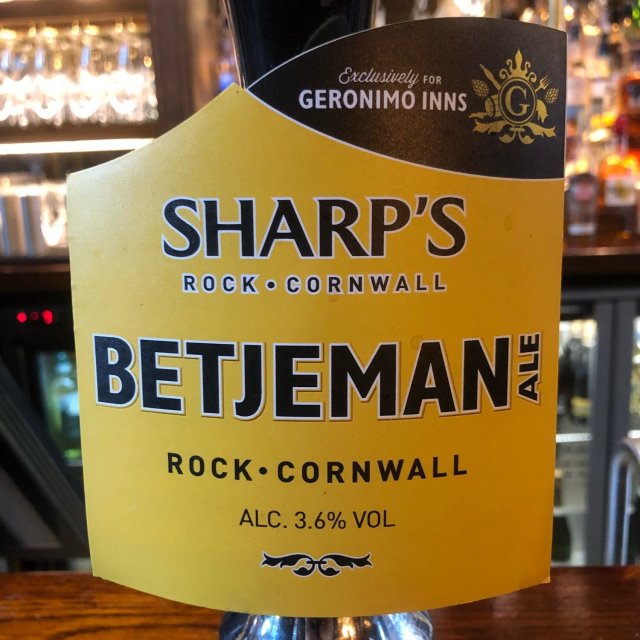 And so this Sunday I found myself in the Blackfriar, a Nicholson’s Pub in Blackfriars: “Set in a historic, Art Nouveau Grade II masterpiece of a building, The Blackfriar was built in 1875 on the site of a Dominican friary. The building was designed by architect H. Fuller-Clark and artist Henry Poole, who were both committed to the free-thinking arts and crafts movement." 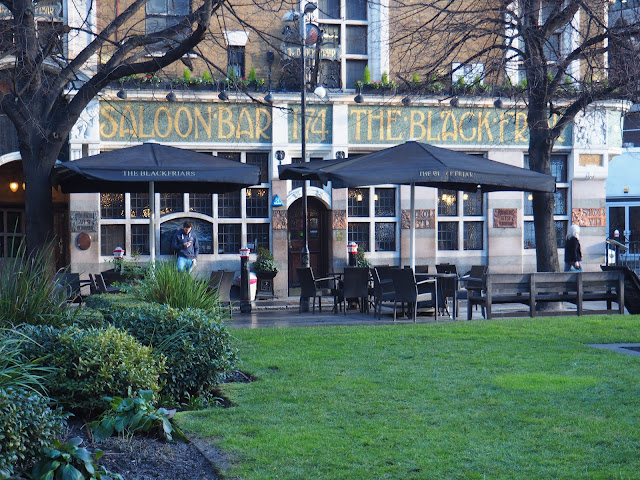 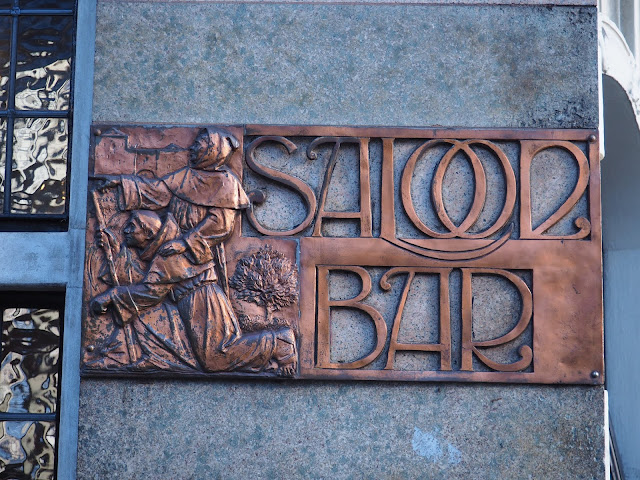 I thought freely, and ate a perfectly good plate of fish and chips, perhaps not as good as the ones at The Betjeman Arms though somewhat larger, 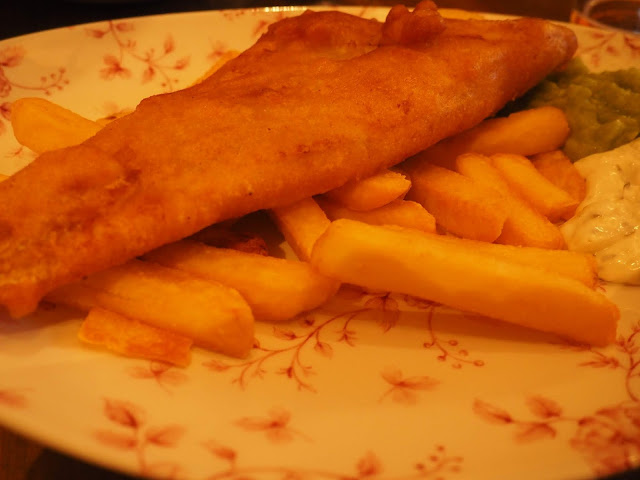 And, no fight having broken out, I went downstairs to the loo and found the staircase was lined with photographs of John Betjeman.  Wouldn’t you know it?  He saved this place too! 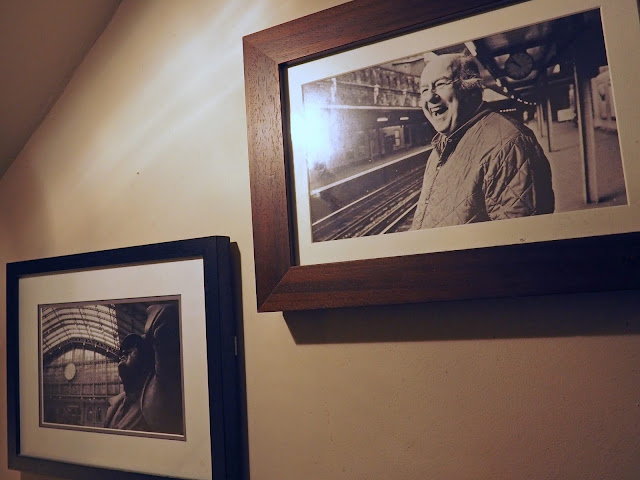 “I expect you know that story of the ancient and reverend head of an Oxford college, a man of few words and those remarkable. Someone had brought a guest to the high table who was a confirmed teetotaler. At the end of dinner he was offered a glass of port, and proclaimed in a loud voice ‘I would rather commit adultery than drink a glass of port.’ Then, that ancient and reverend head of the house broke the silence by saying ‘And who wouldn’t?’”

But still, have a drink while you’re waiting. 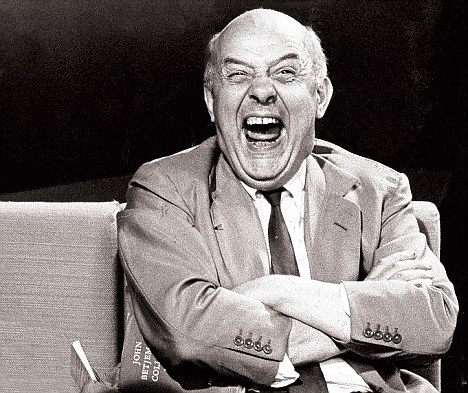 Posted by GeoffNIcholson at 1:07 PM