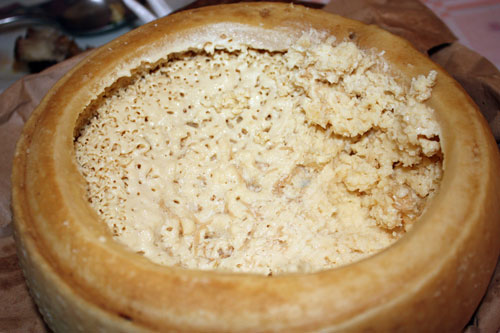 It is, I understand, made by taking a full pecorino cheese, and punching a hole in the rind, thereby allowing Piophila casei (otherwise known as the cheese fly) to get in and lay eggs. The eggs hatch and the newborn maggots start to eat the cheese, excreting “acids” (as the more euphemistic literature describes it) which break down the hard pecorino and turn it into a soft cheese.  The lore states that you have to eat the cheese while the maggots are alive and kicking, resulting in a flavor (according to reports – I have no personal experience) that tastes like a peppery cross between a pecorino and a gorgonzola; which, if true, doesn’t sound like a taste worth all that trouble. 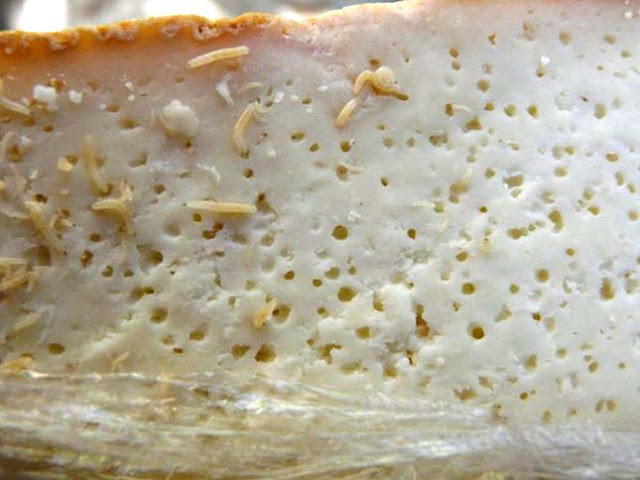 As for the law, well there’s considerable debate and contradiction about where and whether casu marzu is legal.  You’ll find plenty of sources that tell you it’s banned under US and EU regulations.  Nevertheless, the interwebs are pulsing with people who’ve eaten it and written about it, often under titles like “My Lifelong Search for the World’s Most Dangerous Cheese.”

And of course some people have eaten casu marzu at their local Italian restaurant.  Below is a friend of Bradley Hawk (who runs the website Amuse Bouche) eating it at Ornella Trattoria in Astoria, Queens. 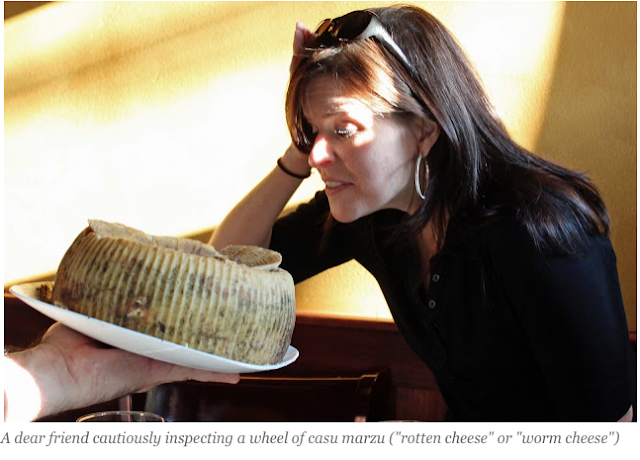 And will you be surprised that the likes of Ramsey and Zimmern have been filmed eating it? 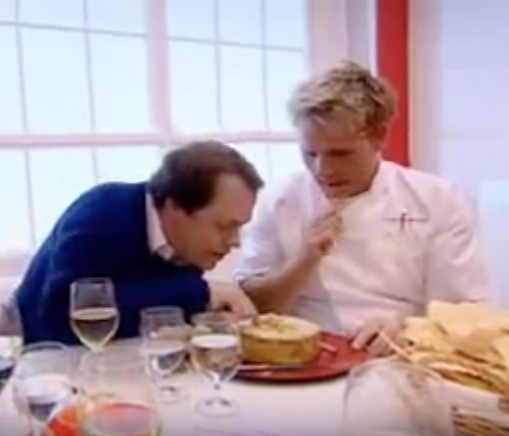 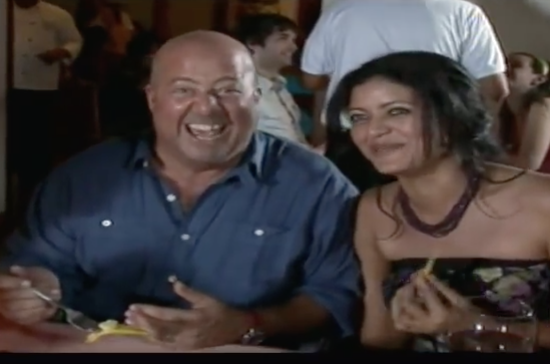 Would I want to eat casu marzu?  Well yes, of course I would, for the experience, although I don’t know how pleasurable it would be.  There seems to be quite a psychologically barrier to eating live maggots, presumably because the presence of maggots is a pretty reliable marker that food isn’t fit to eat.  Also it also seems unnecessarily hard on the maggots, but I suppose I would (in some sense) find it “edible.”

The only inedible cheese I’ve confronted in living memory was this: Organic Bob’s Knobs, a Lancashire cheese. 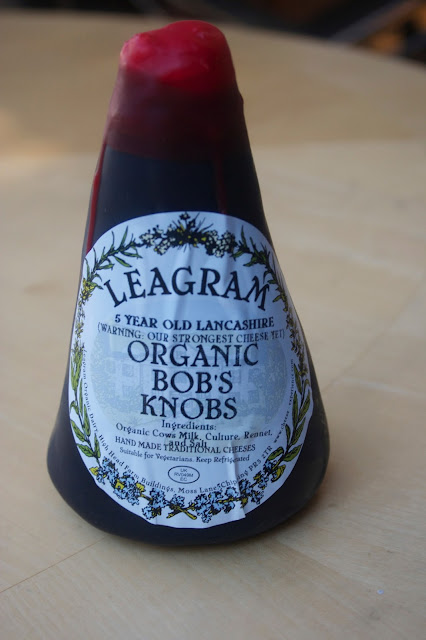 I’m not sure if the problem was with me or with it. It does have a warning on the label saying its their strongest cheese yet, but I’m no wimp in these matters, and in reality it smelled and tasted of nothing but ammonia.  It had come a long way, and as you see, it was encased in wax and maybe that was the real issue, because I can’t really believe it was meant to taste the way it did.  A couple of slivers was as much as I could eat.

Poking around online, researching casu marzu, I discover, and I suppose I’d have realized this sooner if I’d ever thought about it, there are more cheese blogs out there than you can shake a stick at, some very corporate, some very personal, though the latter tend to have short lives.  I was intrigued by a site titled Cheese Poet, but there hasn’t had a post since 2012.  Without it, I’d never have been aware of the existence of the From Girls (as in fromage) and their calendar: 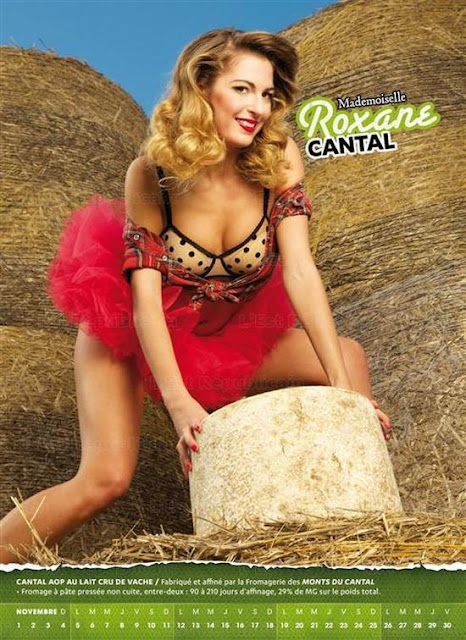 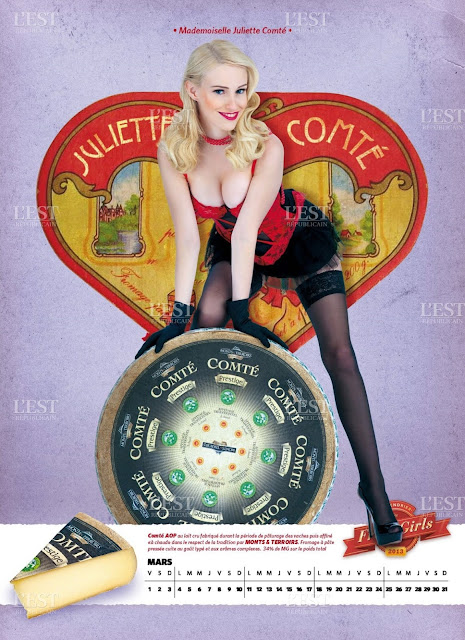 The supermarket nearest to where I live is a Gelson’s – “really high prices when you can’t be bothered to go anywhere else” - but they do have a pretty decent cheese selection.  So, full of cheese-based enthusiasm, I went in and bought myself some Melkbus 149 Truffle Gouda – “contains truffle and truffle flavor” according to the label. 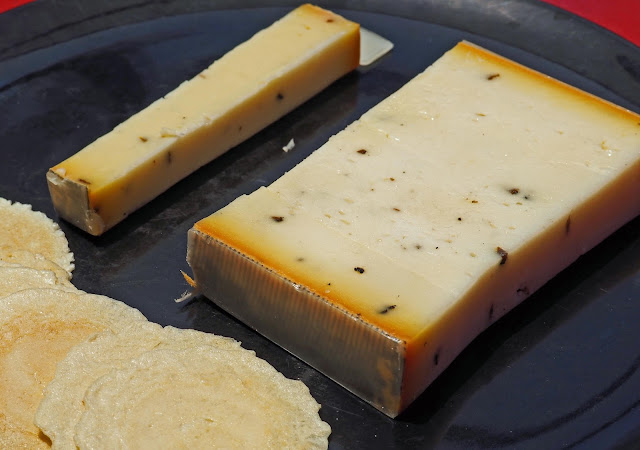 And you know it’s pretty good – tangy, little bit sour, the truffle flavor is well back in the mix, and it it’s much softer and creamier than most Gouda which is a plus in my opinion.  Edible?  You bet.  See, this cheese blogging is as easy as falling off a log.

Posted by GeoffNIcholson at 4:19 PM