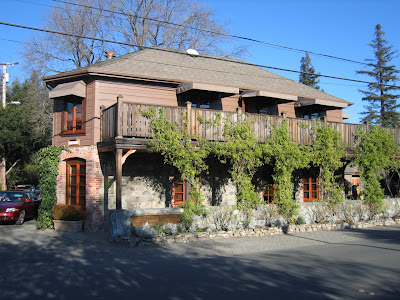 Life being as it is, and having recently blogged about the French Laundry, on Saturday night I found myself in a restaurant talking to someone who’d just been there.  The someone was top novelist Mark Z. Danielewski, and we were in a Texas barbeque joint called Bludso’s, in Los Angeles, celebrating the birthday of fellow litterateur Anthony Miller.  Mark said the French Laundry experience had been just wonderful, especially the service, though he reckoned it would probably be a once in a lifetime thing.  He said he lost count of how many courses there were, but he thought it was probably about twelve. 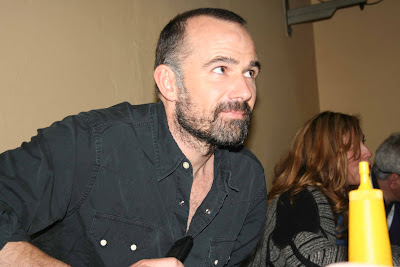 Mark was, and in my limited experience usually is, good company in a restaurant, but his novel House of Leaves contains this passage (I have edited it just a little – but I think he’ll forgive me)
“Then … in a crowded restaurant … you'll watch yourself dismantle every assurance you ever lived by. You'll stand aside as a great complexity intrudes, tearing apart, piece by piece, all of your carefully conceived denials, whether deliberate or unconscious. And then for better or worse you'll turn, unable to resist, though try to resist you still will, fighting with everything you've got not to face the thing you most dread, what is now, what will be, what has always come before, the creature you truly are, the creature we all are, buried in the nameless black of a name.
And then the nightmares will begin.” 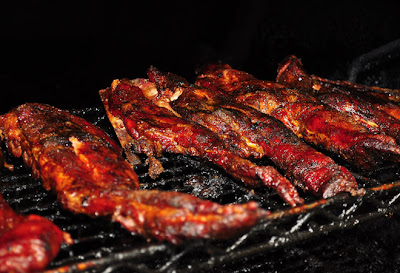 Well, as far as I can tell this didn’t happen to anybody in Bludso’s on Saturday night, but forewarned is forearmed. 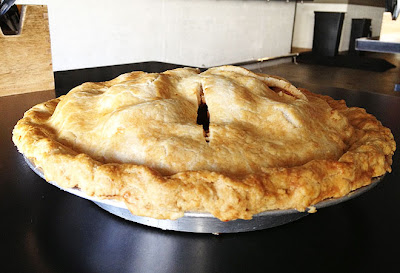 Bludso’s has a legendary apple pie, which has to be ordered in advance, and this had been done, and so one duly arrived at the table.  It was terrific, really up there with some of the best ever, though I held back because it so happened that I had baked an apple pie of my own that very afternoon.  Making apple pies is one of those things that makes me think (erroneously in many cases), “Hey, I can actually cook.”

Anyway, in the restaurant, I said as I often do, “An apple pie without cheese is like a kiss without a squeeze.”  And Mark Z said he’d been hearing this all his life but had never, ever been served a piece of cheese with an apple pie.  This got me thinking. I’ve certainly been served plenty of apple pie with cheese in people’s homes in England, including my own, but in a restaurant?  I think I must have, but I couldn’t actually tell you where.  Fergus Henderson’s St John in London seems a good bet, but I wouldn’t swear to it.  More research needed there. 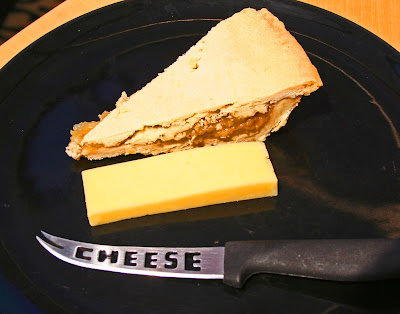 So anyway, next day I had a slice of my own apple pie along with a piece of cheese – that’s it above.  The cheese is “Skellig sweet Cheddar” only very recently introduced to the USA by the Irish Dairy Board, “made from the milk of grass fed cows, 100 per cent natural,” as it says on the pack, though I’m not sure that “100 per cent natural” is actually a meaningful term when it comes to cheese.

I admit that my pie wasn’t the best I’d ever made, and it certainly wasn’t a patch on the Bludso pie, and frankly the cheese was a bit rubbery, I’d have preferred something more crumbly, some Cheshire or Lancashire, but you know, I am a long way from those places.  I’ll take my squeezes where and when I can find them.
Posted by GeoffNIcholson at 10:42 AM