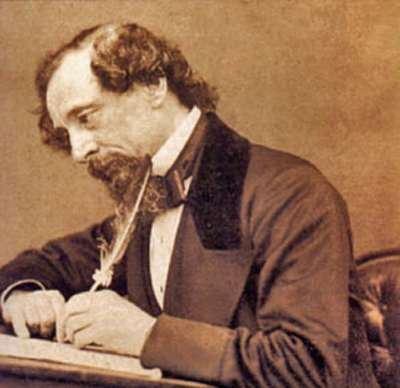 In "The Uncommercial Traveller" Charles Dickens describes his melancholy arrival in London, as a boy. (Incidentally, my spell check offers “infomercial” for “uncommercial.”) He left home in Kent and traveled by stagecoach to the big smoke. “Through all the years that have since passed, have I ever lost the smell of the damp straw in which I was packed – like game – and forwarded, carriage paid, to the Cross Keys, Wood-street, Cheapside, London? There were no other inside passengers, and I consumed my sandwiches in solitude and dreariness, and it rained hard all the way, and I thought life sloppier than I had expected to find it.”

It’s hard not to make a connection and think that the sandwiches were sloppy too, or perhaps soggy because of the rain. You could probably argue that Dickens never really got over it, and that his depictions of London always have elements of solitude and dreariness, though he didn’t have to spend the rest of his life in Cheapside.

In 1908 Royal Doulton, the company that makes tableware and collectables, devised something called Dickens Ware, a line that existed for over 40 years. Plates, jugs, teapots, trays and so on were decorated with characters and scenes from Dickens’ novels. The one depicted below is the “York Sandwich plate” and the character on it is Alfred Jingle from The Pickwick Papers. 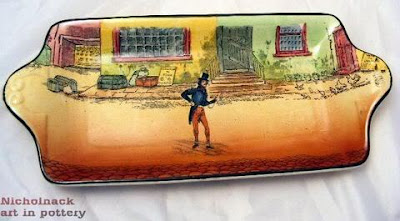 Jingle makes his first appearance, accompanying members of the Pickwick Club on a coach journey. He warns them about the dangers of decapitation from low archways and bridges. Thus:
"Heads, heads - take care of your heads", cried the loquacious stranger as they came out under the low archway which in those days formed the entrance to the coachyard. "Terrible place - dangerous work - other day - five children - mother - tall lady, eating sandwiches - forgot the arch - crash - knock - children look round - mother's head off - sandwich in her hand - no mouth to put it in.”
Posted by GeoffNIcholson at 11:46 AM