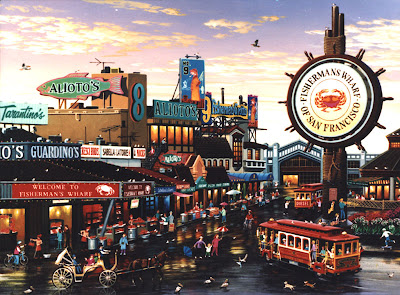 When I first went to San Francisco in the 1970s I went along to Fisherman’s Wharf and looked at all the seafood and felt baffled and overwhelmed by it all.

I was especially confused by the hollowed out loaf of sourdough bread filled with clam chowder. I’d never encountered a clam or a chowder and the concept of sour dough was completely unknown to me. I was drawn to it, but it seemed too strange and exotic. I wouldn’t have known how to order it or how to eat it or how it was supposed to taste Sour bread sounded strange though somehow attractive, and eating the “vessel” you’d eaten from seemed so decadent. I bought some bread and cheese and felt on much safer ground.

These days I eat soudough pretty much every day – it’s the basic bread we buy at the supermarket, and I certainly know what clam chowder is, though it’s not something I ever crave. 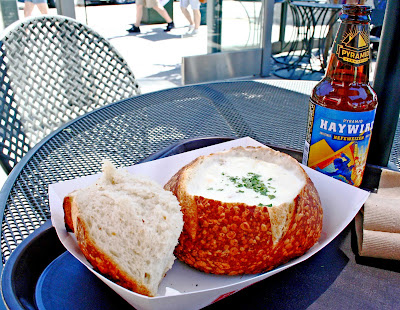 Even so it seems impossible to visit San Francisco without going to Fisherman’s Wharf and having clam chowder in a hollowed out sour dough loaf, usually at the Boudin Bakery. I was there a couple of weeks back and that’s exactly what I did. These days it not only seems unexotic it seems downright dull, and I was left wondering how this dish has become such an attraction to me and everyone else. Maybe it’s like eating fish and chips at the English seaside or eating Nathan’s hotdogs at Coney, you’re not sure you’re really enjoying them but you think you should.

My San Francisco visit wasn’t especially food-related but, to my surprise, I did find a kind of potato I’d never eaten before. It was in a French restaurant on Grant Avenue called Café de La Presse, I ordered the the Confit de Canard Maison and it came with “potatoes salardaise.” I didn’t take a picture, because the restaurant seemed too classy and I didn't want to seem like a rube. It looked like this: 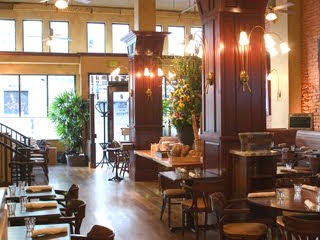 I wasn’t completely sure how they were cooked, though garlic and duck fat were certainly involved, and when I got home I couldn’t find a recipe in any of my cookbooks, least of all Julia Childs. I figure it must be in Larousse Gastronomique but my copy has (not so mysteriously) disappeared. Online recipes are of course wildly various, not least in the spelling of the word itself, which sometimes appears as “sarladaise.” They seem to be a speciality of the Dordogne.

But the basics are simple enough, essentially you fry slices of potato in duck (or goose) fat along with garlic, onion and parsley. It’s the cooking time that gets really interesting. Some recipes suggest twenty minutes, some suggest two hours, by which time you’re pretty much making a confit of the potatoes themselves, which is OK by me. And the fact is, it’s hard to go wrong with those ingredients, as my own humble efforts (below) prove. 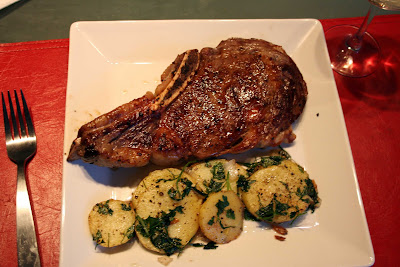 Posted by GeoffNIcholson at 3:47 PM