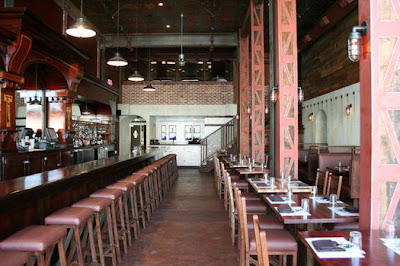 A newish Hollywood restauran, called District, is causing a bit of a stir with one of its starters, actually what’s referred to on the menu as one of its “breads.” They’re serving “duck fat Yorkshire pudding w/ thyme (allow 15 minutes).” Obviously this had to be checked out. There were other menu items to be checked out as well: fried head cheese, venison stuffed relleno, corn agnolotti. But obviously it was the Yorkshire pudding that was most in need of scrutiny.

We went, we ate, and they were terrific; served sizzling hot in black cloth a basket, oily but not too oily, and soft and dense but not too dense. The Loved One said she’d have preferred more crunch but that didn’t bother me. I’ve probably eaten too many dried out, English institutional Yorkshire puddings in my life. 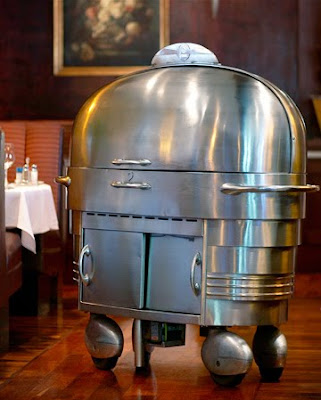 If you think it seems a little strange to be eating Yorkshire puddings in Los Angeles, I’d tend to agree with you, but the fact is they’re less of a rarity here than you might think. You can certainly get them at Lawry’s on La Cienaga (cited, in an earlier incarnation, in “The Long Goodbye” and discussed elsewhere in this blog), which is a sort of copy of the London restaurant, Simpson’s in the Strand, and it’s one of those copies that’s an improvement on the original. That's their dinner cart above. 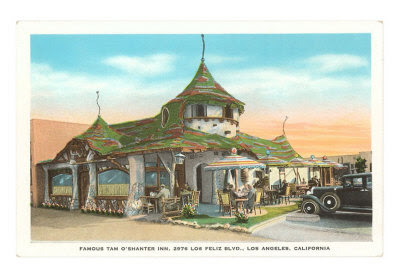 You can also get them at the Tam O’Shanter in Los Feliz, also owned by Lawry’s, and not a copy of anything as far as I can tell. It’s vaguely Scottish themed and the serving staff wear a kind of all-purpose traditional dress, and they do serve haggis around Burns night, but its thoroughly Californian, and pretty much a self-invention. I’ve heard that the Grill on the Alley also does Yorkshire pudding, but it's a bit further into Beverly Hills than I like to go.

I think a true Yorkshireman would have complained that the Yorkshire puddings at District were a bit small – about the size of a meatball - but that’s what true Yorkshiremen are like. I am a Yorkshireman, though I suspect not a very true any more. You can see why a restaurant might want you not to fill up too much on cheap starters: they want you to have plenty of room for the expensive main courses. But Yorkshire pudding was invented to do precisely the opposite. In working class Yorkshire homes the pudding was served before the main Sunday roast, so you’d want less roast beef. 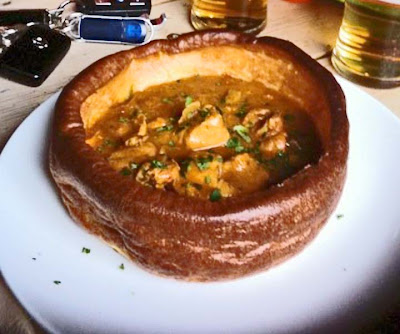 And at some point in the 1980s when I was living in Yorkshire, many of the local pubs came up with the idea of serving “filled” Yorkshire puddings. They made plate-size puddings, crusty round the edges with a deep well in the center, cooked beforehand and reheated to order I’m pretty sure, and these were then filled with something or other: beef stew or fish stew or in some cases, I swear, curried chicken. As fusion cooking goes, it’s hard to get much more fused than that. 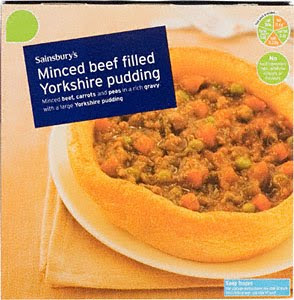 Incidentally, as I’ve just discovered, calling your restaurant District makes it all but impossible to find on Google. Typing in variations of the words District, Restaurant, Hollywood and Yorkshire Pudding gets you nowhere at all, and brings up restaurants in theatre districts or business development districts all over the place. Arguably I did once live in the Yorkshire pudding district, and to an extent I still do, but these days it’s a territory of the mind rather than of geography.

Oh yeah, and by the way, there is no need whatsoever for anybody ever to buy Yorkshire pudding mix. 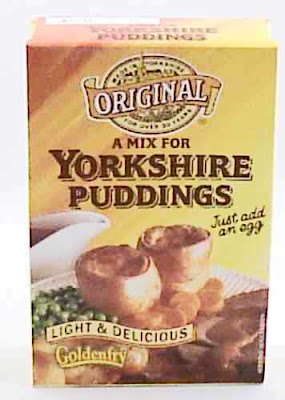 Posted by GeoffNIcholson at 11:12 AM