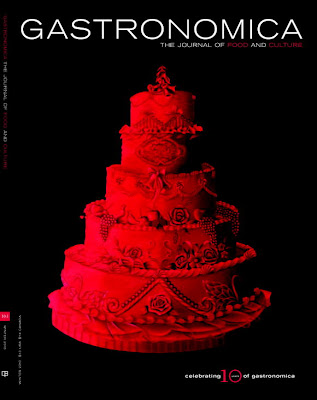 An article of mine, about my mother’s all-white eating habits, has just appeared in the new issue of Gastronomica: a great magazine.

The article doesn’t appear in their online version, so here it is in full.
*
EATING WHITE 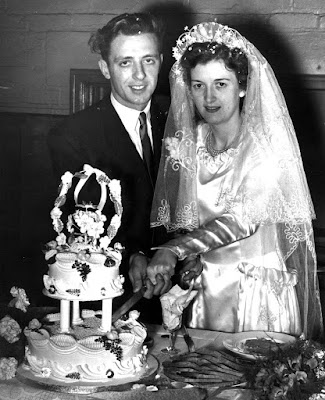 Today I ate lunch in memory of my mother. She died about a decade ago, and every once in a while I feel the need to replicate the kind of lunch she and I ate together many times. The meal consisted of a cheese sandwich, made with white Cheshire cheese on white bread, along with a glass of cold milk. If this seems a rather pallid and unexciting meal, then that’s exactly the way my mother would have wanted it.

Since I grew up, and my mother lived all her life, in northern England, and since I now live in Los Angeles, this memorial meal of mine may have lacked some authenticity. Cheshire cheese, available at any grocery store in England, is considered quite a delicacy here in California, and I had to make a trip to a specialty cheese store. To be fair, not all the Cheshire cheese sold in England is of very high quality. At its best Cheshire cheese is simultaneously moist, crumbly, sweet and tangy. When it’s not at its best it’s just bland: again, my mother would have had no problem with that. 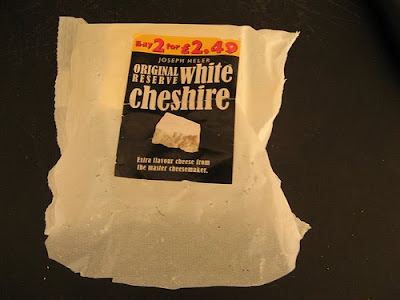 The bread I grew up eating in England has no exact American equivalent: Wonder Bread may be the nearest. Ours was called Mother’s Pride, and although I don’t think my mom was naive enough to think she was fulfilling her maternal duties by buying this brand, I know she appreciated its softness and its snowy whiteness. These days I’m a wholemeal man, but I admit there’s still some guilty pleasure to be had in eating a slice of processed, factory-produced white bread, especially spread with pale, salted butter, the way my mother ate it. 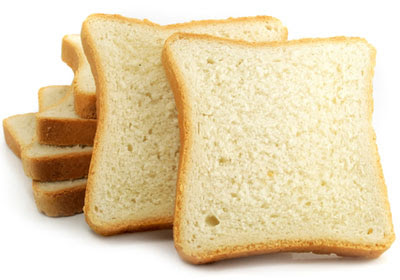 As for the glass of milk, full fat of course (my mother would not have seen the point of any other kind) well, that has much of the guilt and very little of the pleasure. If you grew up in England at a certain time in history, your school, on behalf of the government, provided you with a daily dose of “school milk” and we were led to believe we had a moral duty to drink it. The kids who didn’t like milk were regarded as a bit strange. If any of them were lactose intolerant they certainly kept quiet about it. 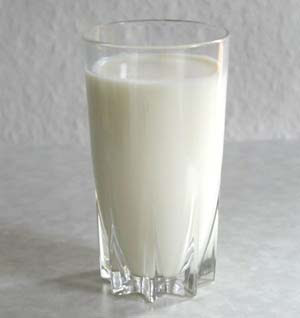 Today, of course, I worry about my cholesterol as much as the next man. My mother entertained no such worries. She loved milk, and she loved cream even more; milky coffee, milk puddings, creamy soups, creamy sauces, vanilla ice cream. Perhaps it was because she’d been through World War Two, a time when milk was one of the many things rationed in England, a time when there were bigger things to worry about than cholesterol. But I don’t think it was the historical associations, and I’m not even sure it was the taste of milk that she really liked. I think it was the colour. She just loved white food. 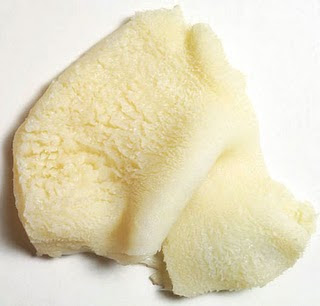 My mother wasn’t, and never had any ambitions to be, a good cook, but she did care about keeping my father fed and happy. These two things weren’t absolutely synonymous, but they were inextricably linked, and so she became the cook he wanted her to be, which meant that she provided heavy, overcooked, tasteless English food. 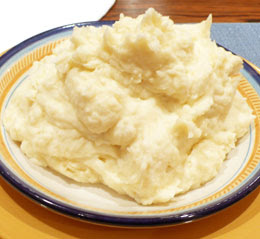 I don’t suppose my father’s eating habits were especially strange for a white, working class man of his generation. He liked meat and potatoes in large quantities. Vegetables were present but irrelevant, dessert was essential but it didn’t have to be fancy. He didn’t want “adventure” in his eating. He wanted slabs of pork and beef, sausages, pies, suet puddings.
Of course these are not primarily white foods, but there were other areas where my mother could sometimes satisfy both her own and my father’s tastes. She made excellent creamy mashed potatoes, for instance. She made cod, stewed with onions in milk: tripe was served exactly the same way, and it was a long time before I realized tripe wasn’t a kind of fish. She cooked cauliflower and served it with a white cornflour sauce. She served blancmange, custards, store-bought cream cakes. 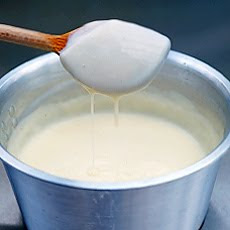 You might have thought that chicken would have been a natural menu item, but we never ate it. My father had briefly worked on a farm when he was a boy and had developed a violent aversion to poultry. Equally, although it was permissible to eat rice in a sweet rice pudding, we couldn’t eat it in savory form: my father hinted darkly at rice-related experiences he’d had in Ceylon during the war, intense and too terrible to be spoken of. As for pasta, well I think it never really crossed my father’s mind that a man like himself would ever eat pasta. 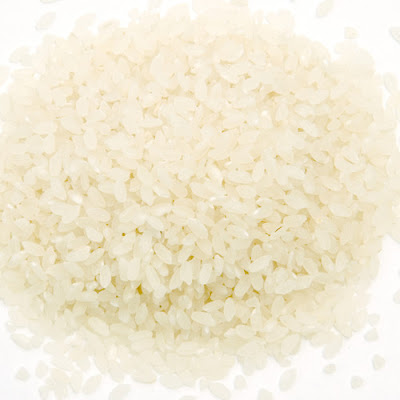 I now know that my mother must have been incredibly eager to eat chicken, rice and pasta, because she started cooking them for herself the moment my father died. When she cooked them for me - I’d long since left home by then - I dropped broad hints that they might be improved by adding a few herbs and spices, but my mother’s pantry contained no seasonings except salt and pepper, and will it surprise you that she favored packaged, ground white pepper? Anything else would have adulterated the whiteness. 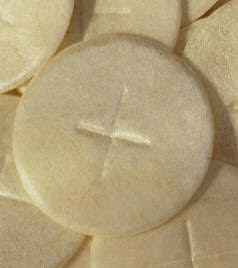 My mother was a Catholic: my father and I were not. Although she wasn’t a church-goer except at Christmas and Easter, I’ve often wondered whether she made some connection, unconscious perhaps, between food and purity: white food meant a white soul. Perhaps that’s a little too obvious. And I’m sure you could speculate about why she should want to become “purer” after my father’s death, but I shan’t. Whatever the reason, white foods were her idea of comfort food, and it seemed to me at the time, and still does now, that as a widow in her late sixties my mother was entitled to seek comfort wherever she wanted. 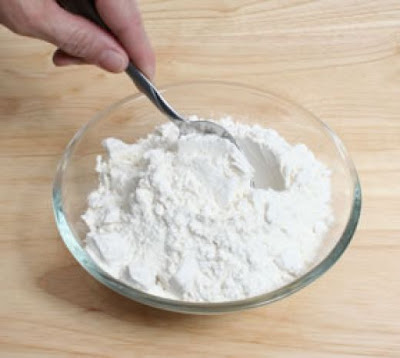 Today there is a “no white food” movement, an all-too-simple to follow diet that avoids white products, partly on the basis that potatoes, pasta, rice and bread are wicked carbohydrates, and partly because the whiteness of sugar and flour, for instance, is a sign that the food has been processed, bleached, made unnatural. There seems to be a lot of good sense in this line of thought, but it’s one that would have had no effect whatsoever on my mother. She wouldn’t touch brown sugar or brown flour. 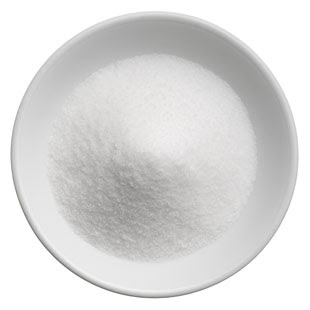 I think we can probably say that my mother’s white diet didn’t, in itself, kill her. She had a pre-existing heart condition, caused by rheumatic fever in childhood, but I think we can also be fairly sure that it didn’t do her health much good. She was found in a chair in her living room by a neighbor one Sunday morning. Her heart had apparently given out some time the previous afternoon. The sliced chicken loaf that she always bought from the local deli counter for her Saturday evening meal, a sort of “high tea,” was found uneaten in the fridge. 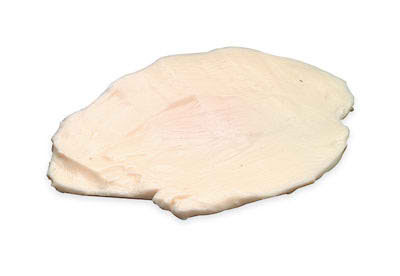 My mother had never discussed what kind of funeral she wanted: she and I didn’t have that sort of conversation. By default, and far from sure that I was doing the right thing, I found myself organizing, then attending, a full-blown Catholic funeral. Inevitably I was rather lost when it came to the finer points of ritual, but in due course I found myself joining the line of those receiving holy communion. A thin white wafer was placed on my tongue by the priest. As it dissolved slowly in my mouth I felt that my mother might have approved of the blandness, but she would surely have wanted something smooth and creamy to help it go down. 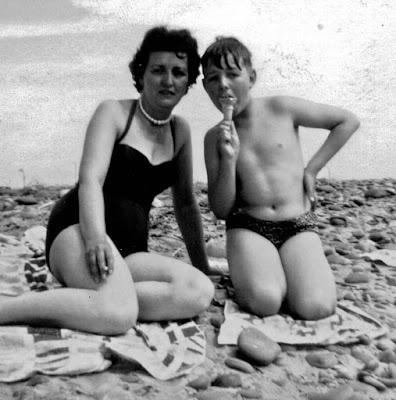