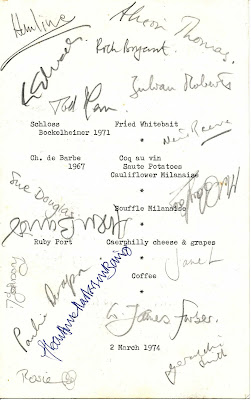 And speaking of the memorialization of meals, as I was a couple of posts back, I managed to dig out the above menu from my (Oh god was it really so long ago) 21st birthday dinner. It was cooked by the college chefs of Caius College, Cambridge where I was studying English literature and sexual frustration.

Understandably enough, I don’t have very clear memories of the food, but coq au vin sounds like the kind of thing the college kitchen did fairly well, and whitebait was regarded as pretty fancy fare at the time. As for Soufflé Milanese I had no memory of it whatsoever, had no idea what it was, and I found it amazing that the kitchen would take on the delicate task of serving 20 or so soufflés. 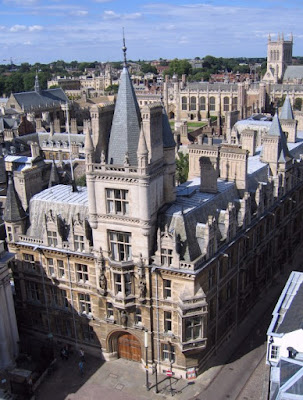 As you see, the people at the meal signed the menu, which is where this whole memorialization thing falls down. These people were my best friends, along with their boyfriends and girlfriends, but I look at those signatures now and I only have the vaguest idea who they all are.

I remember Alison but I’d forgotten her surname was Thomas, and Julian Roberts must have been a boyfriend of Sue Douglas. There’s a Pauline and a Geraldine and I think one of them went out with Neil Reeve, but I wouldn’t swear to it. And as for the person who signed herself Hemline, I have absolutely no idea who that could be. 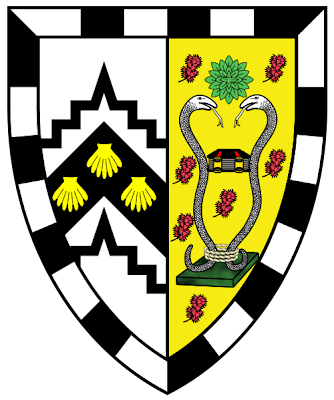 So I decided to make a Soufflé Milanese. I didn’t really think it would result in a Proustian unlocking of memory, but I reckoned it could do no harm. Recipes are in short supply, even on the internet, but the big thing I discovered about Soufflé Milanese is that it’s a cold lemon soufflé. That makes far more sense, far more the kind of thing the Caius kitchen would take on.

I’m not keen on doling out recipes, especially since they not my own, but a soufflé Milanese is really pretty simple. You take a bain marie and beat up 2 egg yolks, a cup of sugar, the juice and zest of two lemons and stir in some gelatin. Once that’s thickened you add half a pint of whipped cream, and fold in two beaten eggs whites. Then you put it in the fridge to set. Easy and it tastes great. 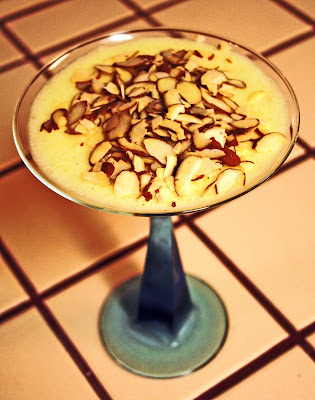 The recipe I was (sort of) following suggested sprinkling slivered almonds on top (see above), and I made a couple that way, but I can’t imagine the Caius kitchen would have done that, so I then I made some without (see below). 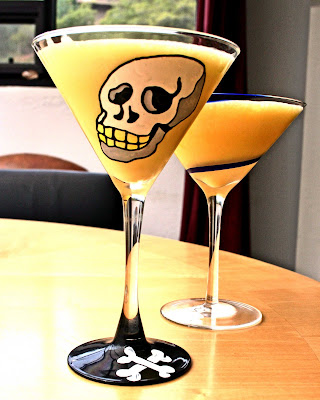 I served my Soufflés Milanese in glasses from the Geoff Nicholson martini glass collection. I’m absolutely certain the Caius kitchen didn’t have these. I’d definitely have remembered.
Posted by GeoffNIcholson at 7:17 PM