THE SAZERAC AND I

The plan seemed simple enough: to drink a sazerac, maybe two, in honor of the late Allen Touissant, a giant of New Orleans music, a top quality piano player, singer and songwriter, and a sharp-dressed man by any conceivable standard. 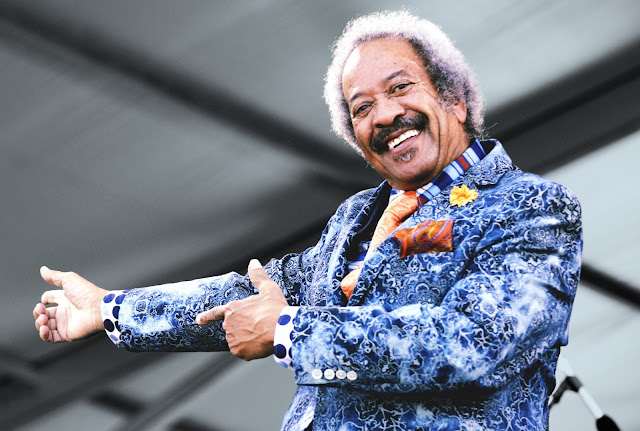 I’d never had a sazerac though I’d certainly drunk all the ingredients separately.  Recipes vary a little with time and place.  The Savoy Cocktail Book which I tend to regard as my bible, gives the recipes as a lump of sugar, a dash of Angostura bitters, 2 ounces of rye whisky, stirred and strained into a cooled (not chilled) glass, then a dash of absinthe added. 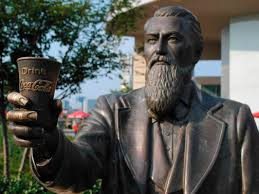 There are certain problems with that recipe, chiefly those bitters.  The story goes that the sazerac was invented in 1838 by Antoine Amedie Peychaud, a New Orleans apothecary, who had created "Peychaud's Bitters." Peychaud supposedly made toddies for his customers, using a double-ended egg cup as a jigger, a thing known as a "coquetier," from which the word "cocktail" supposedly derives, thereby making this the first ever cocktail.  If you believe that, then I have a bridge in Brooklyn I’d like to sell you. 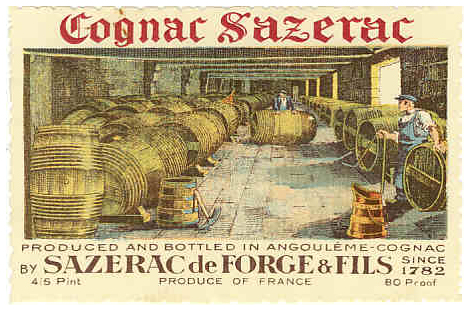 Presumably the drink was not called the sazerac at this time, but by 1850 the recipe had become formalized to use Sazerac French brandy.  By 1873, the recipe had altered and the French brandy was replaced with American Rye whiskey, and only at that point was the absinthe added.

It was a Monday lunchtime when we set off in search of our Allen Toussaint-related sazeracs, and I can see that some might think that drinking whisky cocktails on a Monday lunchtime is a sign of appalling decadence. But I considered it a sign of restraint.  Drinking sazeracs at 3 am on a Saturday morning - that’s my idea of real decadence.

My companion in this small adventure was Lynell George, writer, photographer, and a woman with a deep attachment to New Orleans.  She knew a few places in downtown Los Angeles where we might get a sazerac.  First on the list was The Little Easy Bar.  Allow me to quote the website: “This intimate Gastropub takes you from the bustle of 5th street in DLTA to the heart of New Orleans.”  A picture on the website shows the interior looking like this: 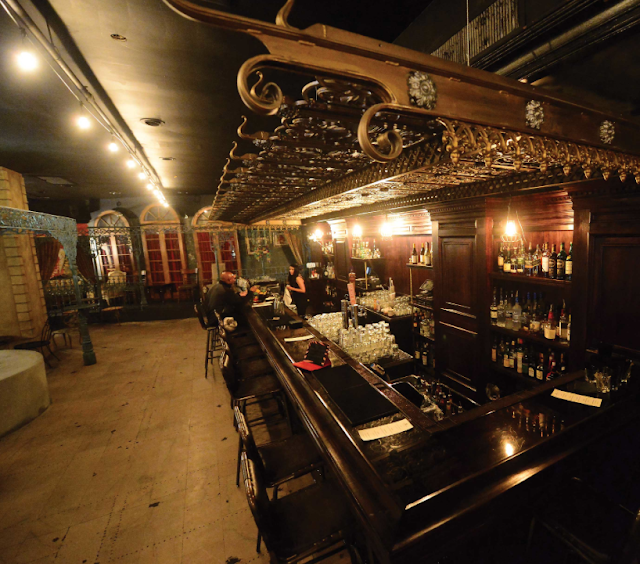 I wouldn’t know, since when we got there it was closed, and is apparently closed every Monday.  Who’d have thought? Lynell had another, and she thought perhaps better, idea.  She had fond memories of the sazerac served in the bar of the Biltmore Hotel – apparently its official name is the Gallery Bar and Cognac Room, though I think few ever call it that.  So off we went, only to discover that it too also closed, and that a movie was being shot in the hotel – many trucks outside, a few miscellaneous crewmembers inside, though I can’t swear there was a direct causal link between the movie being made and the bar being closed. 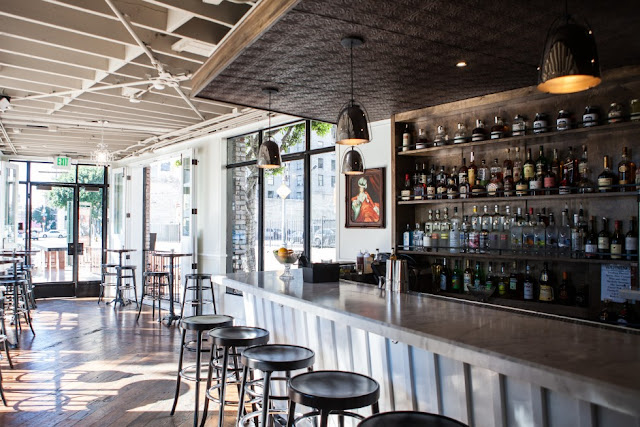 And so we ended up at another place claiming to offer a taste of old New Orleans: Preux and Proper.  Their website says they have a “cocktail program.”  Really.   “Our drinks are creative, heavy handed, and garnished to look like the best gift ever … the gift of intoxication.”  Their cocktail list cites the sazerac recipe as “JP Wiser rye, Pierre Ferrand ambre cognac, simple syrup, herbsaint” which sounded authentic enough.  The place also had the great advantage of being open, and almost empty when we got there.

The bartender/waiter came over as soon as we sat down.  “Can I get you anything right away?”
I said, “I hear you make a pretty good sazerac.”
I think he bowed just a little and said, “Well I’m not going to deny that.”
And so two sazeracs were ordered.  We were sitting some way from the bar and I can’t swear that coquetiers were used, although we could see that the drinks were obviously being made with some care, and they were delivered and looked like this: 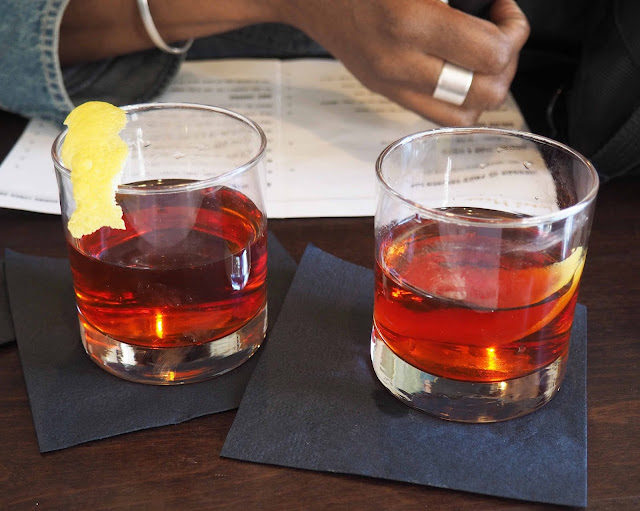 My sazerac seemed perfectly OK.  It tasted of whisky, of course, and I got the aniseed-ish whiff of the herbsaint.  It was perhaps sweeter than I’d have liked but if you put simple syrup (or a sugar cube) in a drink what else can you expect?  My companion didn’t say much, though I sensed she wasn’t 100 per cent enthused.
A couple of minutes later the bartender came back to the table and said, “Are those sazeracs the way you like them?”
And I admitted that since I’d never had one before that was a difficult question to answer.
Then the barman said, “OK. Look. I know I made those drinks all wrong.  I just realized I put in twice as much sugar as I should have.”
A part of me was very glad to know this and the bartender insisted on remaking the drinks to the correct recipe.
“Thanks,” I said, “a man who cares.”
“Yep there are still a few of us left.”
New and improved drinks duly arrived and were happily consumed.  And yet we still weren’t quite satisfied.  My companion’s memory of the Biltmore sazerac still nagged at her.  A phone call to the hotel revealed that the bar was due to open at 4 (filming or no filming) and a little after the appointed hour, there we were. 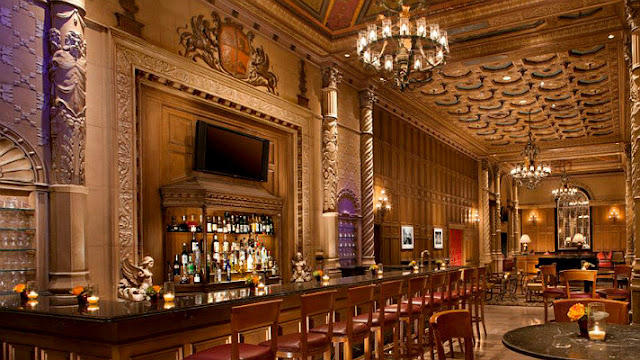 The whole of the Biltmore looks and feels like a movie set, deliberately so I’m sure, and it’s appeared on screen in Chinatown, Catwoman, The Adventures of Rocky and Bullwinkle and Mad Men, to name just a few of the productions I’ve seen. 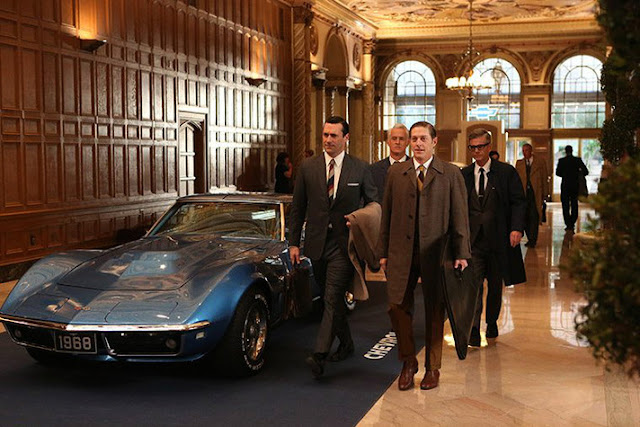 Behind the bar was Greg Guzuilian (that’s how his name is spelled on the menu though different sources use variant spellings), a man who obviously loves the kind of ritual that goes with making any cocktail, but especially the sazerac. “Templeton Rye, Absinthe, Peychaud's, Lemon Twist” according to the menu.  And there was indeed the trick with the two separate glasses, and the sugar lump was crushed with a pestle, and certainly eggcup-shaped jiggers were involved.  Just watching this process could be the basis of a short movie,   Another man who cares.
The drinks were definitely superior to the Preux and Proper ones, but they were also smaller. They looked like this: 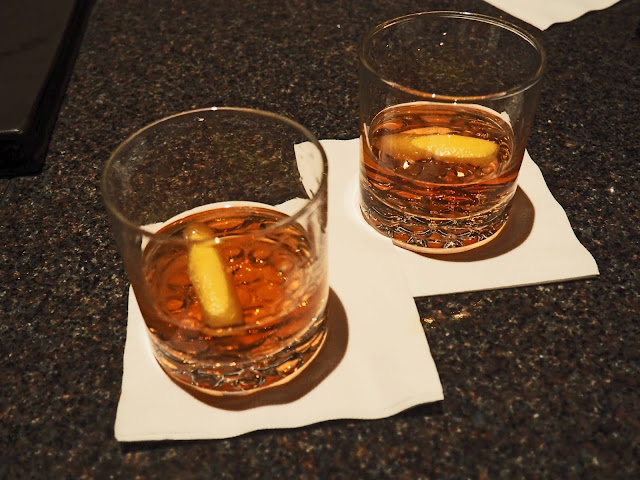 Mr. Guzuilian is a good man, and has a cocktail list of his own creations, thus: 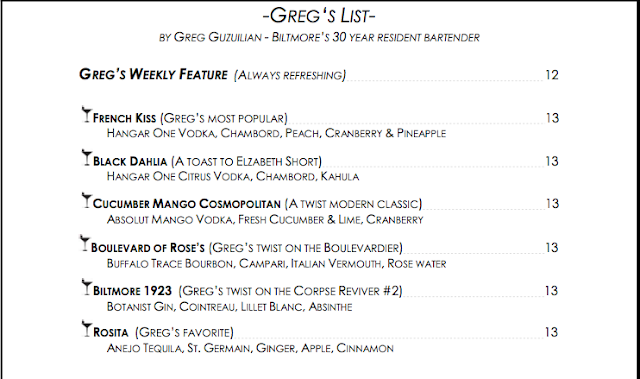 I rather like the look of the Black Dahlia, named in honor of the Elizabeth Short who was murdered in LA in 1947, her body mutilated, cut in half at the waist, drained of blood and dumped on an empty lot near Leimert Park.  She was last seen hailing a cab outside the Biltmore.
Here’s a photograph of Greg Guzuilian at work, though I can’t tell you what cocktail he’s pouring.

And here’s the real beauty part: about 12 years ago a Japanese couple came to the Biltmore and enjoyed Greg’s service and mixological skills.  They then went home to Japan and … wait for it … opened the Greg Guzelian bar (another variant spelling) in Okinawa, a fact of which Greg is extremely and justifiably proud.  Having a cocktail named after you is honor enough, although it would be preferable not to have to be murdered first.  But having a bar named after you, in another country, in another culture – could it get any better than that? 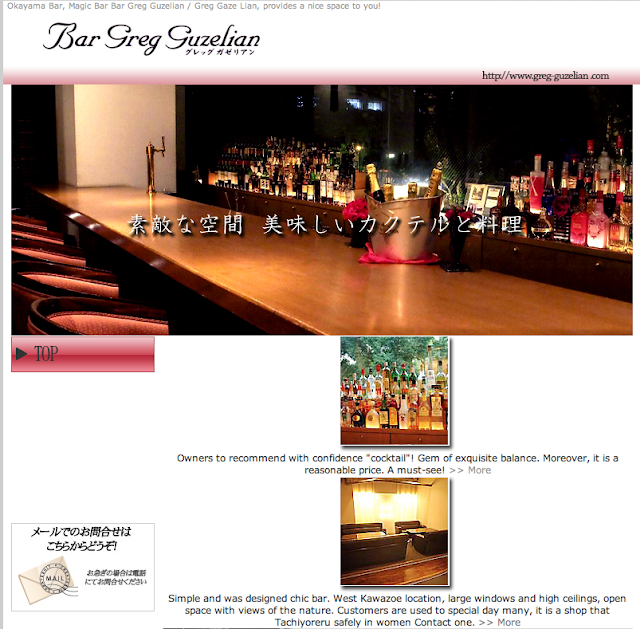 Posted by GeoffNIcholson at 4:15 PM