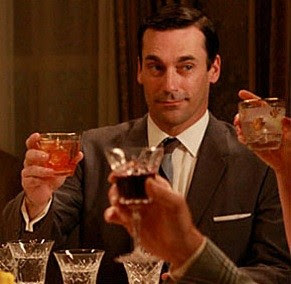 And here’s a thing, actually several things.  First, a headline in the New York Post, Sunday August 19th, that reads “Cheers! Drinking at lunch makes you smarter, more fun – and a better New Yorker.”  Well, I have no argument with that.  It came illustrated by a picture of Don Draper in Mad Men, above a story by Kyle Smith, initially describing research done at the University of Illinois.  They “discovered” that “creativity increases 50% after a few drinks.”  They gave their subjects enough vodka and cranberry juice to put their blood-alcohol at just below 0.08 – the legal driving limit.  They then set them some tests and found that boozed up people delivered more correct answers more quickly than their sober counterparts.  Hey, not much fun being in that control group.

The article also reported research published in the Journal of Consumer Psychology about the “imbibing idiot bias.”  They found that in job interviews conducted over dinner, interviewers thought that candidates who ordered a drink with their meal were less intelligent than the ones who didn’t.  Wha?

Somewhere in all this, the New York Post article suggests, America has become a nation of killjoys, and that things were way better, and certainly more fun, in the days of the three martini lunch, and who would argue?  I’m not an expert on Mad Men but I think Don Draper is a whisky man rather than a martini man, even so I dare anyone to accuse him of being an imbibing idiot. 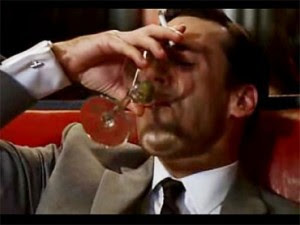 And then I read a rather overwrought piece by Troy Hooper in SF Weekly, dated March 14, 2012, titled Operation Midnight Climax: How the CIA Dosed S.F. Citizens with LSD.  This will not be absolute news to a lot of people, but Hooper does seem to have some new (if challengeable) chapter and verse on the CIA’s clearly immoral and illegal experiments, dosing unsuspecting rubes with LSD, and watching the hilarious consequences.

Hooper tells us there were various CIA safe houses around San Francisco in the 1950s and 60s, and one was at 225 Chestnut on Telegraph Hill.  Then he writes, “Inside, prostitutes paid by the government to lure clients to the apartment served up acid-laced cocktails to unsuspecting johns, while martini-swilling secret agents observed their every move from behind a two-way mirror.”  He also tells us “To get the guys in the mood, the walls were adorned with photographs of tortured women in bondage and provocative posters from French artist Henri de Toulouse-Lautrec.”

I find myself slightly lost in the moral maze of this prose.  Is the “French art” of Toulouse-Lautrec really being considered as equivalent to photographs of tortured women in bondage?  Didn’t every hippy chick from San Francisco to Scunthorpe have a Lautrec poster on her bedroom wall?  Were they all getting in the mood and being provoked? 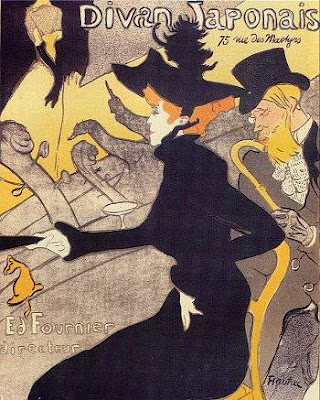 In any case, yes, giving LSD to unsuspecting folks is clearly very bad and wrong, and watching their sexual activities through two-way mirrors hardly less so, but it’s that phrase “martini-swilling secret agents” that really bothers me.  Is it the martini that’s so wrong, or just the swilling?  If they’d been drinking them steadily, or sipping them gently, would that have been OK?  If they’d been smoking marijuana, would that?  Sampling a little hock and seltzer?

But speaking of LSD, Timothy Leary writes in The Politics of Ecstasy “The Creative Have to Turn On:  It is conservatively estimated that over 70 per cent of non-academic creative artists have used psychedelic substances in their work.”  Then he makes a list just in case you’re not sure what a “non-academic creative artist” is (I admit I wasn’t sure at all). “Painters.  Poets.  Musicians.  Dancers.  Actors.  Directors.  Beatle-brows.  The whisky-drinking middlebrows imprison the growing edge.  Meditate on this situation.” 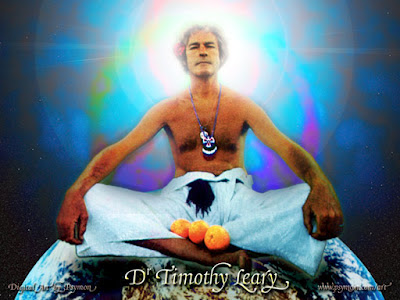 Well, I have meditated.  I do, of course, accept that people’s choice of drug is a large part of their self-definition, and I can understand that people who drink Thunderbird may not necessarily want to hang out with people who drink pina coladas, that drinkers of Petrus don’t find many meth addicts in their circle.  But why this need to diss other people’s choice of consciousness changer? 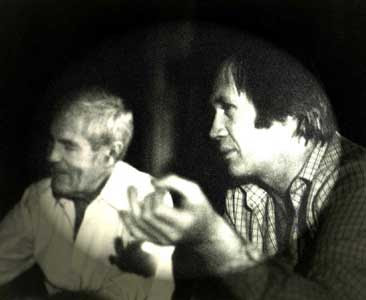 Still, perhaps to understand all is to forgive all.  Timothy Leary’s wife committed suicide in 1955, leaving him alone to raise a son and daughter. He became, by his own account, in a piece titled “Death of the Mind” “an anonymous institutional employee who drove to work each morning in a long line of commuter cars and drove home each night and drank martinis … “  Well, at least he didn’t swill them. 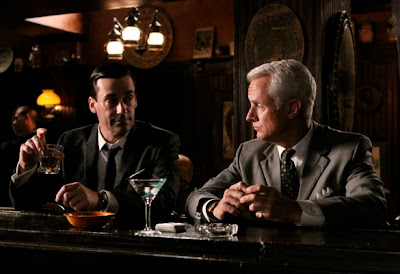 Posted by GeoffNIcholson at 2:16 PM