EAT WITH THE GUITAR MAN

Have you been keeping your eye on the revival of Duane Eddy’s career?  I have, largely because he owes it all to Sheffield, and specifically to Richard Hawley, singer/songwriter, guitarist, former sideman in Pulp, and connoisseur of all things Sheffield, especially Henderson’s Relish.  More of that later. 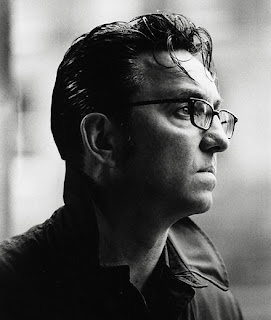 The story goes that Hawley (above), a great fan of retro guitar twang decided it was time for Eddy to come out of retirement, got him to Sheffield, made an album with him, had him play at the Glastonbury Festival, and so on, and along the way turned Eddy into a fan of Sheffield and the Peak District. 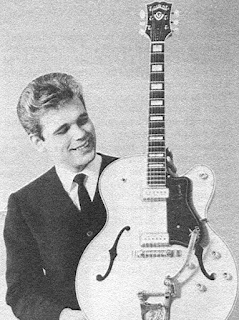 I can’t find much foodie reference in the Eddie oeuvre.  There are tracks titled “Giddy Goose,” and “Soda Fountain Girl” one titled “Shuckin” which I guess is a reference to oysters, and there’s one called “Tiger Love and Turnip Greens” but I’m not sure what that’s about.  Still, what’s in a title, especially when you’re a non-singing, guitar instrumentalist? 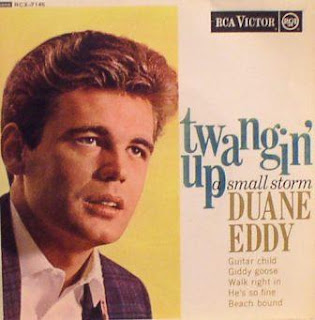 However, now that Eddy’s been to Sheffield it appears he’s found his inner foodie, and he’s a locavore too.  Here he is interviewed on the Quietus website:
“There's a pub called the Strines Inn, up on the moors above a reservoir with peacocks running about the place. We had a great meal there and they had a huge Yorkshire pudding, so I ordered that with the home-made chilli in it, like it was a big bowl. The chilli was amazing, as good as any I've had in Texas or anywhere else.”
The Strines Inn: I know it well.  Everybody who’s ever lived in Sheffield knows it, though I don't remember any peacocks. 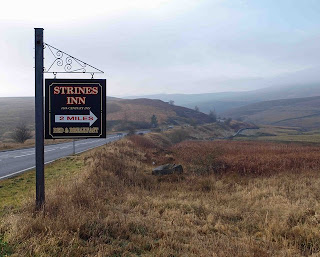 “We also went to Bakewell,” Eddy continues, “because we'd had a Bakewell tart, with custard. That was just heaven, one of the most delicious things I have ever had in my whole mouth, that's an old corny joke, but I'm not joking about the deliciousness.”
I love his enthusiasm, but having grown up eating my mother’s Bakewell tarts, I really don’t see what’s so great about them.  Maybe a tart is always without honor in its own county, although we were in Yorkshire and Bakewell's in Derbyshire, but nah, I'm trying too hard. 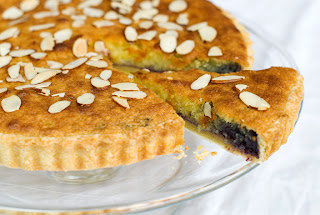 Now, I’m not sure how much of a foodie Richard Hawley is either, but he seems to like food.  The cover of his early album Late Night Final had a picture of him in a café in the Sheffield Castle Market, mentioned before in this blog. 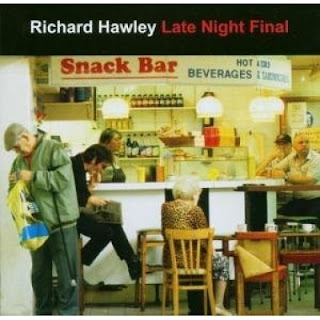 He did an interview about food last year with The Financial Times (of all people) and revealed that Pomegranates remind him of childhood, that he doesn’t like pineapple, and that he finds Guinness irresistible.  But above all he’s a fan of Henderson’s Relish

I stand to be corrected, but I think Henderson’s relish is Sheffield’s only indigenous food invention.  I grew up splashing it on stew, meat pies and mushie peas, much like everyone else in Sheffield.  It’s a kind of Worcestershire sauce, but it doesn’t contain anchovies so it can claim to be vegetarian.  It's interesting that we used so much of this stuff in my family, because it contains all sorts of ingredients that my mother otherwise wouldn’t have had in the house: garlic, turmeric, tamarind.  Tamarind, for Pete’s sake. 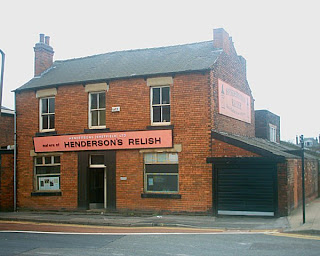 Hawley played a gig at the Henderson’s factory to promote that first album and there’s been back a “limited edition” Hawley Henderson’s Relish, though I think it was just the label that was limited.  The stuff inside was classic Henderson’s. 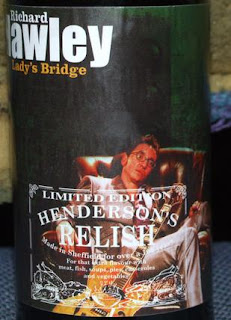 And now I discover two things, first that there are  Henderson's flavor crisps available in the UK, and secondly, as I look around my kitchen I see that my own supply of Henderson’s is getting low (see below).  Maybe it’s time to visit Sheffield.  Maybe I’ll run into Duane Eddy. 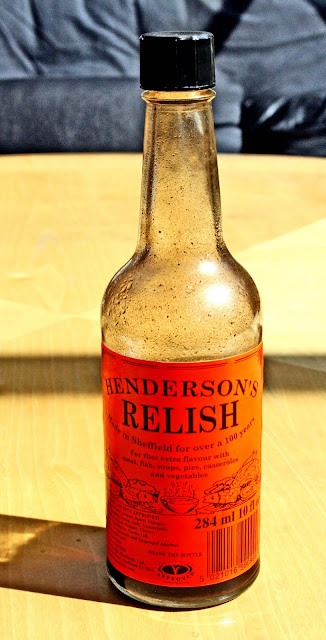 Posted by GeoffNIcholson at 6:16 PM