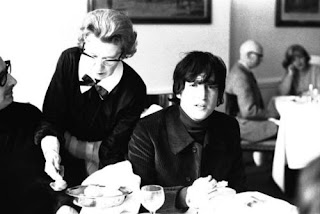 I believe I’ve found one of the most beautiful dining rooms in the LA area. That isn't it above.

For one reason and another I’ve been spending a fair amount of time at the St. John’s Health Care Center in Santa Monica: the Loved One has been having hip surgery, and all seems to have gone very well indeed, thanks. But of course a lot of time was spent hanging around waiting for something to happen, or hanging round until something had happened, and although there are various places to wait in the hospital, inevitably people tend to gravitate to the cafeteria, which in the case of St John’s is an amazing place.

The cafeteria opens into a cavernous area called the “Dining Court” a seventy foot high atrium, all smooth white surfaces, wood paneling, skylights, and glass walls with views of Santa Monica, big art on the walls, and seating for I guess a couple of hundred people, though it never seemed to get crowded.  If this were a real restaurant I'd be there all the time. 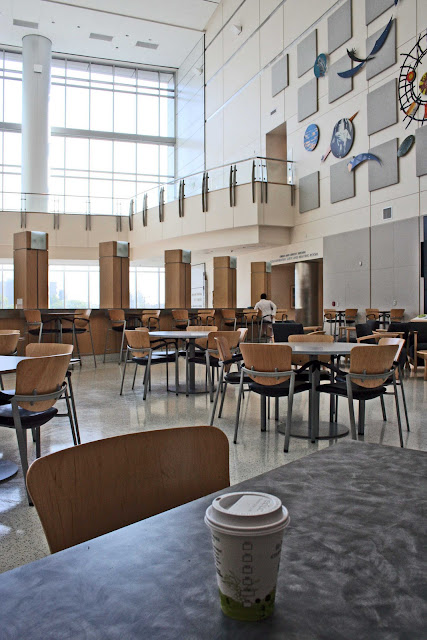 The room is used by visitors and also by hospital staff, but only rarely by patients, as far as I can tell.  As soon as patients are ambulatory they get sent home, which is obviously as it should be.  On the other hand it seems a bit of a shame that patients don’t get to use this wonderful place, which is certainly cheering, and very probably healing.
Of course, the cafeteria food eaten in the dining court isn’t all that great, and I have no intention of “reviewing” it, but I can safely say I’ve never eaten such an ordinary tuna sandwich in such an extraordinary space.
Heck, there’s even a grand piano.  Nobody played it while I was there, but back in my wife’s room we did get some bedside entertainment.  The Loved One had just finished eating a pretty decent-looking cheese and ham sandwich on marble rye with potato salad, when three extremely winsome young women arrived offering to sing for us. 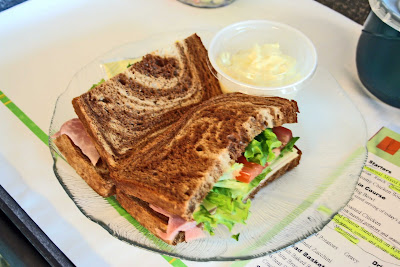 This promised to be excruciating, like when a Mariachi band or gypsy violinist comes to your table in a restaurant and you’re supposed to smile appreciatively while they interrupt your meal, but these girls were pretty good, and they played the Beatles’ “Come Together,” which is one of my favorite songs, though an odd choice for a hospital you might think with its references to toe jam, shooting Coca Cola, and especially the line, “Hold you in his armchair you can feel his disease.”  When last seen they’d moved on to the next room and were singing Brown Eyed Girl.  I hope they got to play in the Dining Court.
Posted by GeoffNIcholson at 5:36 PM