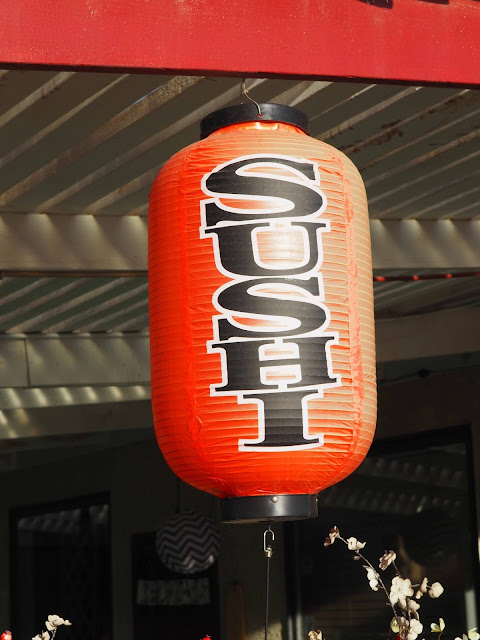 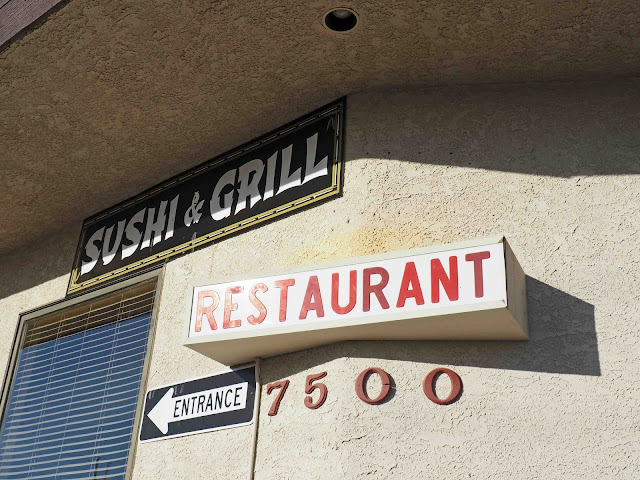 When I’m there I look around the really quite huge dining room and it always seems to me that 90 percent of the people in the place are eating giant rolls like the one below, and in general I hate rolls with a hard and gem like flame. 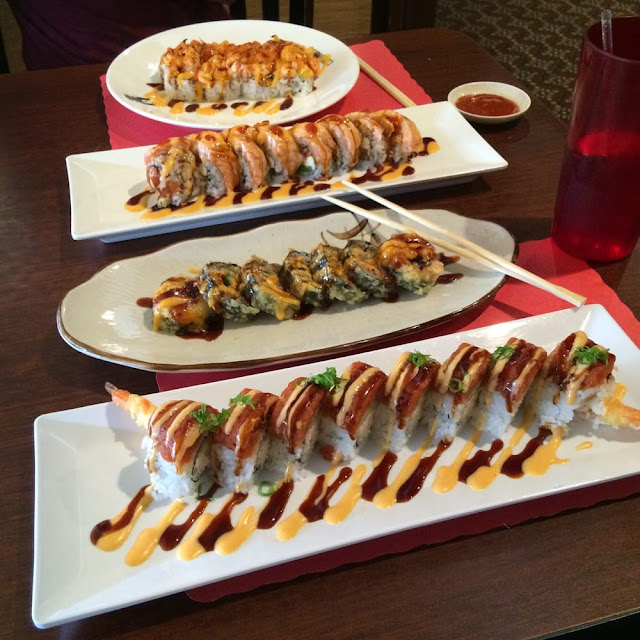 And I’m not dissing anybody for having different tastes than me, but really guys, this place has excellent sashimi and sushi, and I don’t think there is any standard by which a dense cylinder of rice coated sticky glop is preferable to yellowtail or octopus. 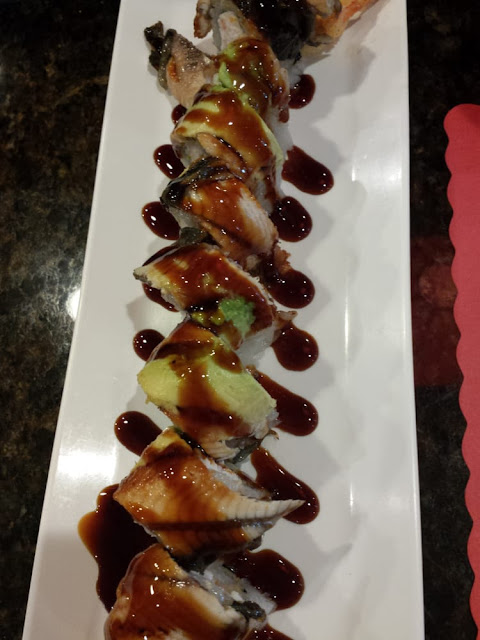 I suppose I can’t be the only person who orders the raw fish, since they keep offering it, and I know I should be glad that it’s there at all, and the menus isn’t all monkey balls (yeah, I had them once), but obviously I’m in a minority.  Sometimes apparently the sushi comes in a boat – this pic and the couple above all come from Yelp. 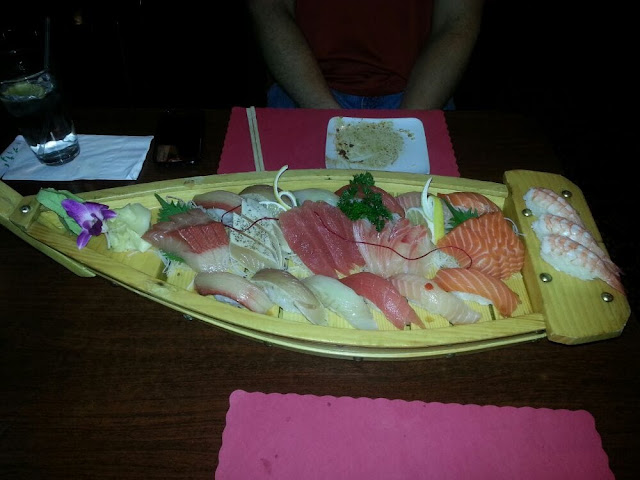 Now, it so happens that there’s a curious and crammed and vaguely chaotic bookstore in Yucca Valley called The Sagebrush Press Bookstore.  It looks like it’s struggling, so I always buy something in the interests of supporting indie business, but in fact it’s looked that way for a very long time so I guess they’re doing something right.  And the owners do run a Baja Bug. 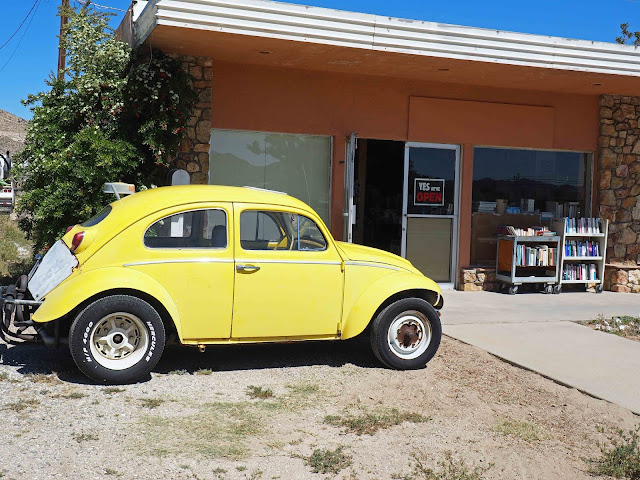 And there in the cookery book section was this: Japanese Cookbook (100 Favorite Japanese Recipes for Western Cooks) by Dr. Aya Kagawa. 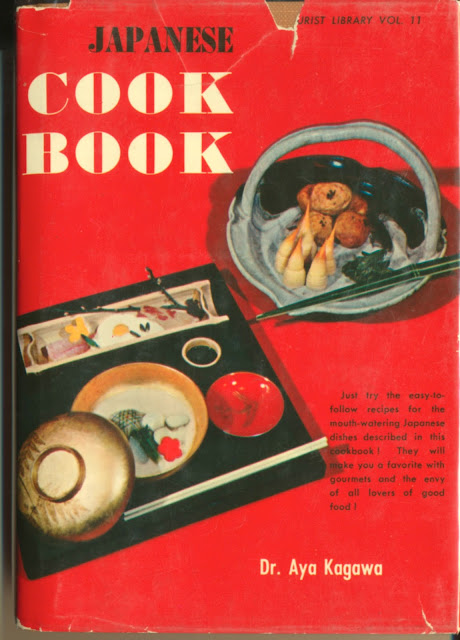 It’s dated 1963 and was published by the Japan Travel Bureau, based in Tokyo.  The list of other titles at the back, tells us they published a lot of titles designed to explain the Japan to westerners – books on Japanese history, wood cuts, gardens, etiquette and so on, even one on Japanese humor. 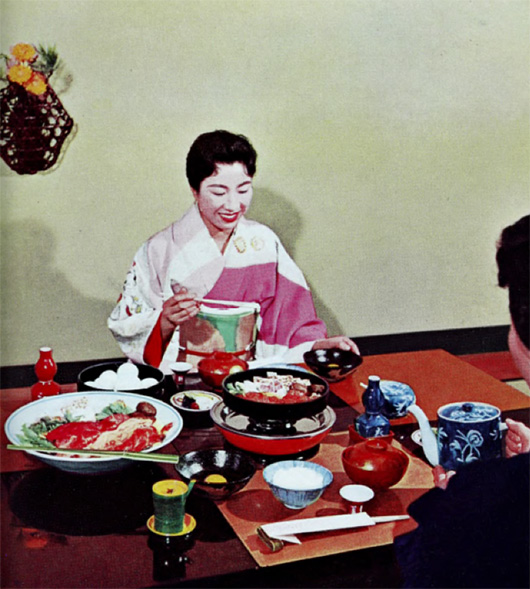 The book is a fine little historic volume, interestingly and curiously illustrated – also interesting that in places (though not throughout) there are references to something called zushi. 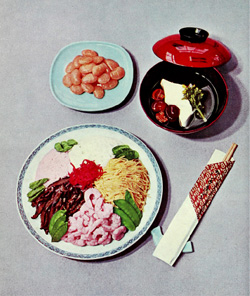 But my favorite recipe is titled “Small Birds Broiled Whole” – the list of ingredients consists chiefly of six small birds (along with sake, mirin, shoyu and powdered Japanese pepper).   An explanatory note tells the western cook to use “Quails in spring, the sparrow in autumn, the wild dove in winter, etc).” It’s the “etc” that seems especially mysterious and somehow threatening.  Do they mean robins, humming birds, the lesser goldfinch, budgerigars?  There’s no illustration of the end result, though the book does contain this very fine ad on its last page: 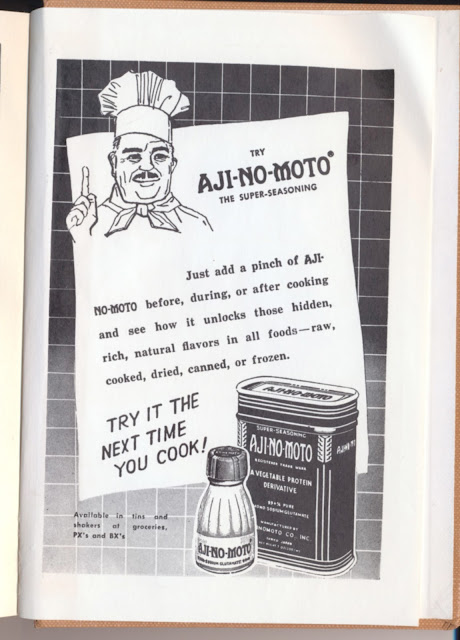 Posted by GeoffNIcholson at 2:12 PM