I’ve been drinking curious beers so that you don’t have to, though I know you, you’ll probably drink them anyway. 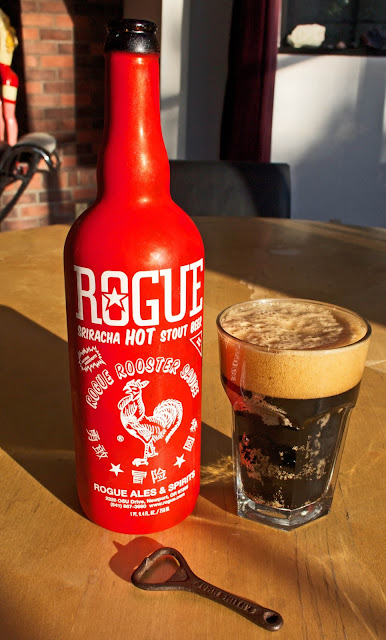 This first one (above) I think is the oddest “Rogue Sriracha Hot Stout Beer”  - not sure about that name – is there really anybody who’d drink this who doesn’t know that stout is a beer?   Well OK, possibly.

I actually got it a couple of months back been, and it’s been sitting in the fridge waiting for just the right moment. But I decided I couldn’t wait that long.
Those of you who know Sriracha at all know it as a hot sauce – and the subject of various  various environmental legal cases in the town of  Irwindale in California, where it’s made: residents complaining of ground chili powder in the air, burning eyes and throats.  Apparently it’s now all been settled, so that’s OK. 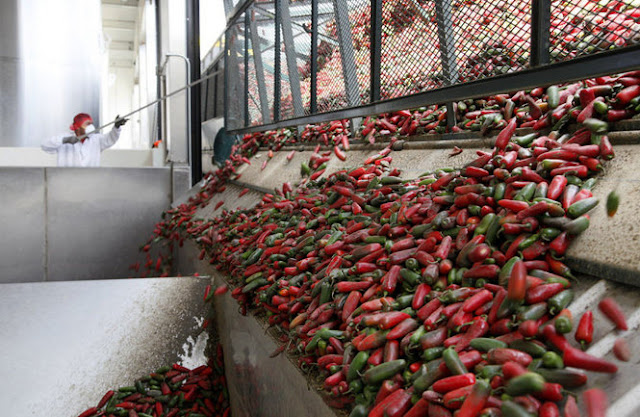 In any case the beer isn’t made by the hot sauce company.  Still, it’s a weird one.  It tastes  like a fairly middle of the road stout, then after you’ve tasted it, in fact after you’ve swallowed it, a slow hot burn rises at the back of your throat.  This is actually better than it sounds.  It’s not unpleasant, it’s just very odd, and not something that the drinking world in any sense needed. 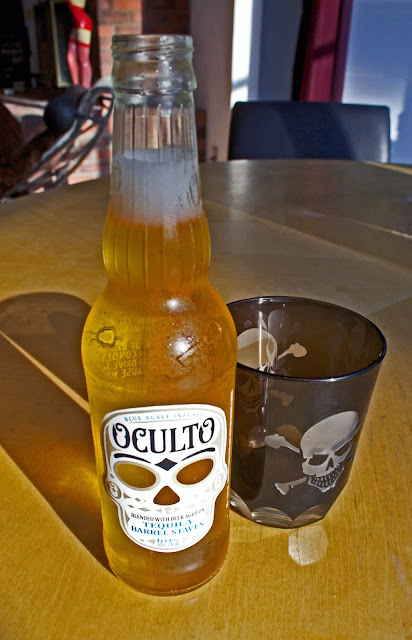 And speaking of uncalled for alcohol innovations there’s this stuff: Oculto.  I say “stuff” cos I’m not even sure it’s really beer.  What it says on the bottle is “blended with beer aged on tequila barrel staves.”  I’ve got no idea what that means and I don’t believe they do either.   I think it’s just random words arranged by the marketing people.
It obviously doesn’t contain tequila – and it certainly doesn’t taste of tequila but then it doesn’t taste much like beer either. I was reminded of that line in Douglas Adams: “He had found a Nutri-Matic machine which had provided him with a plastic cup filled with a liquid that was almost, but not quite, entirely unlike tea.”  Well that’s how it is with this one: a liquid that’s almost, but not quite, entirely unlike beer.  A big squeeze of lime helps a little.  It doesn’t make it taste any better but it hides the flavor.  A few dashes of hot sauce couldn’t make it any worse.
I know I’ve said before that anything tastes better with a skull, so I can only imagine how bad this stuff would taste without one. 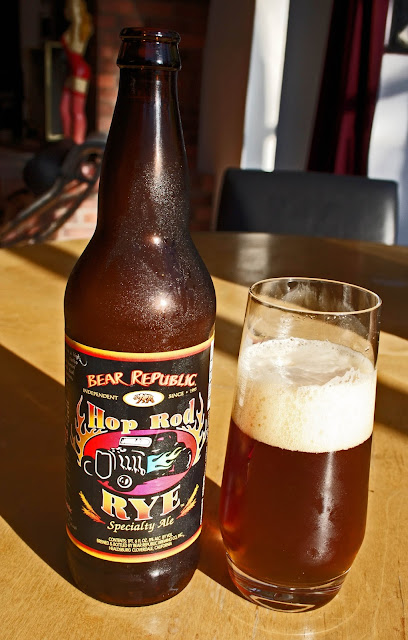 And finally a curious beer that’s actually very good: Hop Rod Rye.  Who doesn’t love the idea of getting bagged and driving hot rods?   Only the idea, mind you.  As it says on the bottle “Don’t drink and drag.”  There’s also some more hot-rodded prose on the label too:  “Hop Rod Rye is a high performance, turbo charged, alcohol burning; monster ale with dual overhead hop injection made with 18 % rye.”
Well, I think this is acceptable  rhetoric rather than oversell.   The beer itself is malty, very dry, tangy, and a little bit spicy, and maybe that’s the taste of the rye, though I only know the taste of rye as it occurs in bread.  It’s terrific, in any case.  The website says it goes well with smoked meat and wild game – which is plenty good enough for me.

Posted by GeoffNIcholson at 7:38 PM