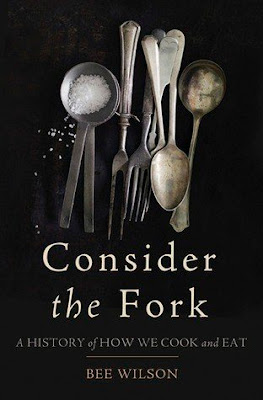 I was recently sent a copy of Bee Wilson’s new book Consider The Fork.   (The publisher is Basic Books.)  The subtitle is “A History of How We Cook and Eat” although it might equally be called a “a curious history of kitchen technology.”

It’s a splendid volume, serious but by no means solemn, and full of the most surprising information.  Who knew for example that the Kenwood mixer was devised by someone named Ken Wood?  Or that the first food processor to be marketed in the USA  - the  Cuisinart - originally sold for the equivalent of $800? 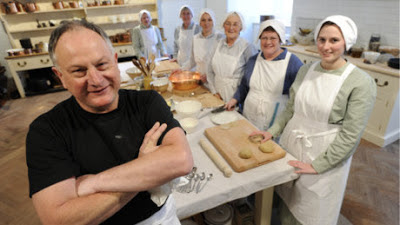 There’s also a terrific section about the spit.  Wilson goes to visit Ivan Day (that's him above), a hands-on food historian, whose name crops up frequently in the wilder highlands of gastronomy, and who cooks the best roast Bee Wilson has ever tasted, using a spit and an open fire.  Day insists that spit roasting is a far from crude or primitive method of cooking, and the reader is left with the realization that most modern roasting is actually a form of baking:  true roasting involves fire not an oven.

Spits, of course, have to be turned, and we know that young boys were sometimes used to turn spits.  Wilson tells the story of John Macdonald (born 1741) who rose to the rank of footman, but was initially employed as cradle rocker, a job from which he was sacked at the age of 5, and he had to change career to become a spit turner. 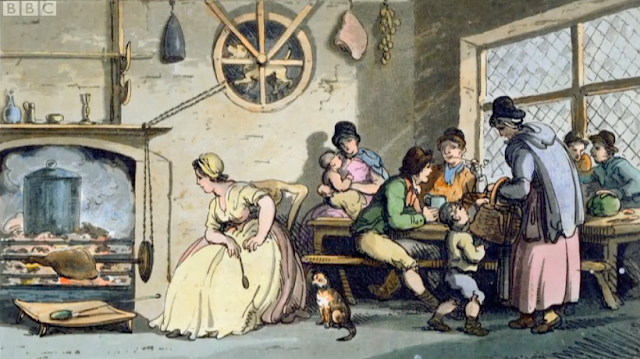 Most of us know that dogs were sometimes used instead of boys, hence the now extinct breed of Turnspit. But who knew that geese were sometimes used too?  Dogs apparently were too smart and ran away.  And geese could go on for twelve hours at a time.

In the United States, that bastion of freedom and morality, animal rights protestors railed successfully against the use of dogs in kitchens, and so in the later 19th century Henry Bergh, founder of the ASPCA, was able to report that small black children were being used instead. 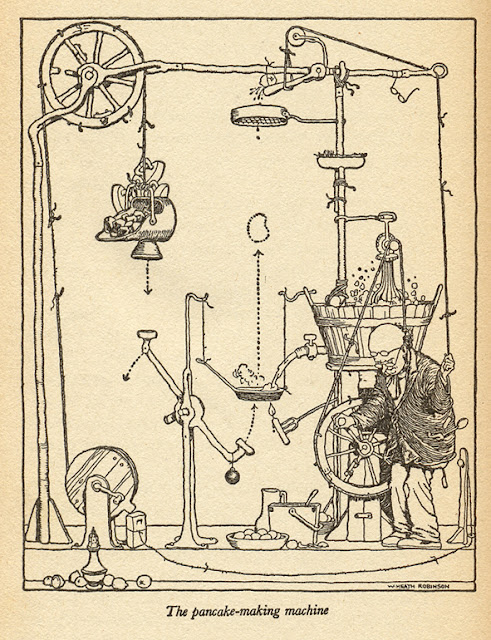 I don’t suppose a child can really be considered a kitchen gadget, but the book did get me thinking about which kitchen gadgets we really need and which we don’t.  I was given an electric lemon squeezer as a wedding present, and squeezing lemons really isn’t a task that requires much automation.  I believe I used it once.  And who really needs an electric pepper grinder, a pneumatic bottle opener, a motorized cocktail shaker, or even one of those acrylic bagel slicers?  (OK, OK, I know some people are bound to say these items are absolutely indispensible).

And then I started thinking about non-existent or fantasy inventions that we really could use – a foolproof oyster opener, a device for extracting salt when you’ve over salted, a device that absolutely guarantees you can crack an egg without ever breaking the yolk.  Ah, dream on, Geoff.

Anyway, life being as it is, Michael Kupperman’s latest ironically deranged cartoon strip features a parody of the new Bond film Skyfall and imagines a low-budget MI5 in which the old firm can no longer afford, say, an Aston Martin with ejector seats and instead comes up with this: 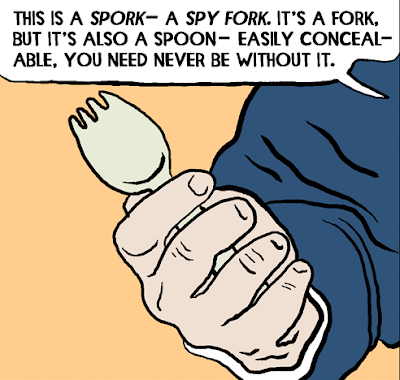 You can see and read the whole Kupperman thing here:

Some say the spork is one of the most significant inventions in the history of eating.  Bee Wilson devotes four pages to it.
Posted by GeoffNIcholson at 10:23 AM