HEAVEN AND EARTH AND PLASTER 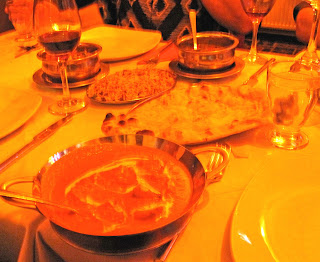 Well, inevitably, things got better after Woking, and although I wasn’t in England for a culinary tour, I did put on quite a few miles, and found myself eating all over the place: enjoying a very English curry in Sheffield, a game pie from the Chatsworth House farm shop, a pork and stuffing sandwich in the George Hotel in Castleton, Derbyshire, then a meat pie in Hardwick Hall, much improved by the addition of Henderson’s relish. 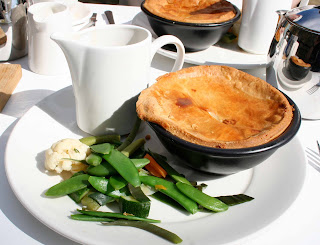 There was a roast pork Sunday lunch in the Leather Bottle in Pleshey in Essex – no stuffing but with a piece of crackling.  The crackling could have been cracklier but you at least they tried.  It also came with two kinds of spuds and 4 other vegetables, which might be trying too hard, 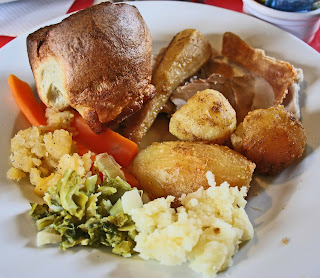 But of course when you really want to get fancy, it’s London that calls.  My fancy dining companion Joanna and I went to lunch at Hix Soho, named after Mark Hix who seems to be considered a kind of god in Britain.  He is also apparently “controversial.” 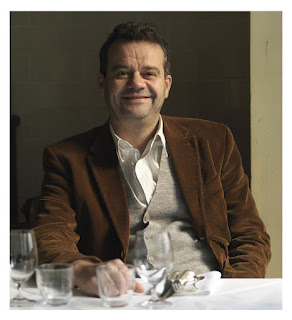 In 2009 celebrity chef Keith Floyd ate lunch at the Hix Oyster and Fish House in Lyme Regis, then a few hours later died of a heart attack.  Hix put an item on the menu named “Keith Floyd's Last Lunch.”  (Certain sources have it as Last Supper, but that surely can’t be right).  Some claimed to find this offensive, but I can’t for the life of me see why.  I assume Keith Floyd, or anyone with a sense of humour about eating, would have been royally amused.  For future reference, any restaurant that wants to put my last meal on their menu will have my blessing to do so, and I hope it isn’t just hospital gruel. 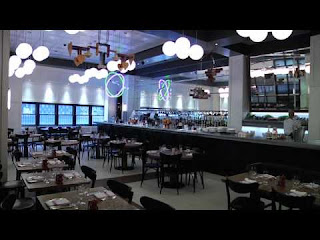 Anyway Keith Floyd's Last Lunch wasn’t on the menu at Hix Soho, but there was something called  Heaven and Earth, which turned out to be a globe of black pudding (wrapped in caul to keep its shape, I think) sitting on a bed of mashed potatoes and apple.  Pretty much impossible to resist: and tasting every bit as good as you’d want it to be. 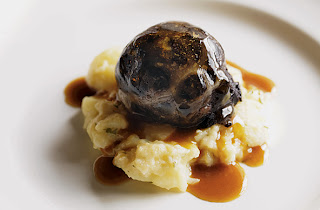 And for main course we had cuttlefish in its own ink.  I was pretty sure I’d had cuttlefish before, but I really couldn’t remember when, and since this came with sea aster, which I had never even heard of, I followed my “eat what you’ve never had before” rule and ordered the beast.  Of course I felt a little bit Husymans-ish, ordering a mostly black meal, but I could live with that.  It looked like this: (actually much better, the light was poor, and the photographer didn’t want to look like a hayseed). 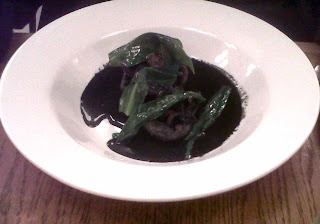 I’ve since discovered that sea aster is sweeping the nation as part of the ongoing foraging kick.  I remember when the same happened with samphire, and sea aster grows in similar places: salt marshes and estuaries.  I heard somebody on the radio describing it as a hip and happening ingredient though since Waitrose now sell it, it may have lost some of its hipness.  Uncooked it looks like this: 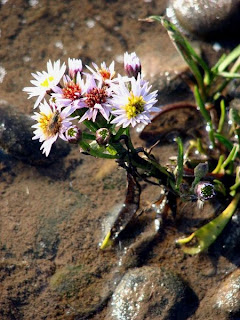 Once cooked it was texturally like a strip of cabbage or celery, but since it was drenched in squid ink it was hard to know what it really tasted like.  And actually that squid ink sauce was the killer element of the meal.  It was good with the cuttlefish, but it was absolutely GREAT with chips.

Any disappointments?  Only that some of the best-looking food wasn’t available for eating.   In a gazebo at Hardwick Hall, there was a fine array of vegetables grown in the garden, good looking spuds and leeks, and the longest parsnips I had ever seen, even if I’m not absolutely sure that a thin, two and a half foot parsnip is really what we’re looking for, but I'd have been keen to sample.  In any case they were only for display. 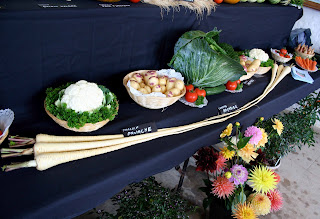 And in the Turret House of Manor Lodge in Sheffield there was a display of a medieval feast featuring a boar’s head and a mouthwatering venison pie, but they were made of plaster: nobody’s idea of a great last meal. 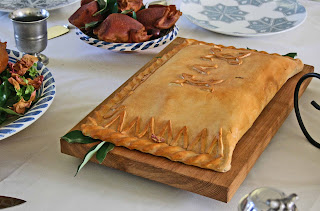 Posted by GeoffNIcholson at 7:30 AM