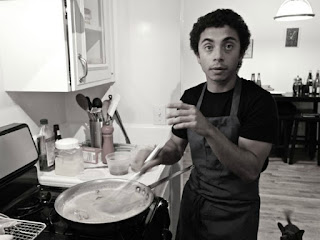 But then something pops up in LA culture that seems designed to give too much ammunition to the other side.  I give you The Vagrancy Project, a private, or perhaps secret (though obviously not very), dining club, run by one Miles Thompson who used to work for the Animal/Son of A Gun people.
According to thrillist.com, “Here's how it works: Vagrancy's built a master list of slightly-above-average attractive people who receive a proprietary list of event dates. The first handful of repliers (they keep it mad-intimate) are then privy to must-have, on-the-DL important-ness like location & time, length of the meal …
“Topping 10+ courses, the donation-based fetes themselves -- which'll eventually fund a less private, more open-to-the-public restaurant -- all have themes (e.g. "I Live in the Wild", "Welcome to the Jungle") and include … foodstuffs like 24hr-marinated goat rib cubes served w/ fried garlic root; tea, butter & raisins-topped rabbit; and skate w/ burnt milk, wine grapes & the oddball Italian vegetable Castelfranco ..” 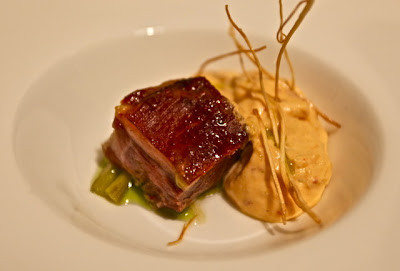 Now I’m not sure exactly how many layers of irony there are in that extract but that phrase “a master list of slightly-above-average attractive people” does make you want to give someone or something a good kick, and at least means I’ll never have to go to one of these events.  I’ll bet you won’t either.  And if you think it’s thrillist that’s being annoying rather than Thompson himself, well, the kid can be pretty annoying in his own right.  On the Cooking Channel blog he says, “we’re searching for our home. We’re traveling from place to place with a dream.”
In fact there’s review in LA Weekly suggesting that the Vagrancy Project is basically some dude who invites people to dinner in his own East Hollywood apartment and charges them, which I suppose isn’t quite legal, hence the “donation.”  And I’ll admit that the food actually looks kind of interesting, as you see above and below. 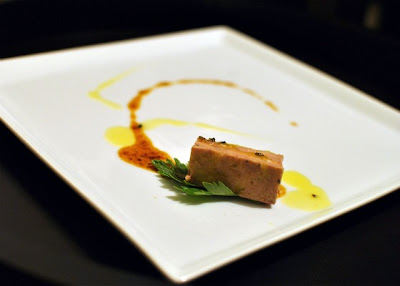 Now, as it happens, the in-laws were in town this week and the Loved One and I did our best to entertain them.  We felt they weren’t secret dining club types any more than I am, and so we took them to Oki-Dog. 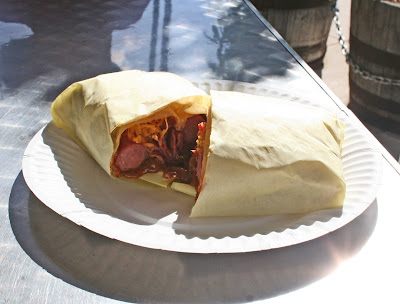 I realize that isn’t the best picture of an oki dog, but if you take it out of the paper it collapses like a dwarf star, and although it’s still perfectly edible, it doesn’t look very photogenic. I’m not sure whether the in-laws enjoyed the food or not, but they certainly enjoyed this sign in the parking lot. Another sign nearby also forbids gambling. 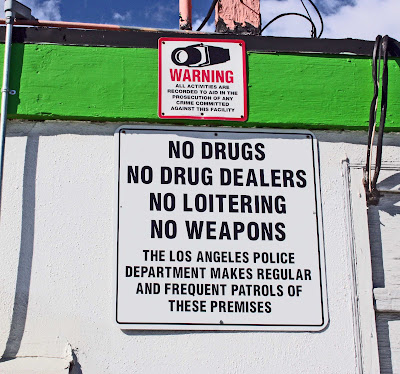 And then in further attempts to entertain the relations we took them to the desert, and stopped in Ridgecrest, and ate breakfast at Kristy’s Family Restaurant, which is a very solid, honest, diner and we were not expecting much in the way of innovation or experimentation.  How wrong we were.  There on the menu, was deep fried banana bread: maybe not an absolute first, but a new one on me.  The waitress told us it was the invention of the manager.  I can’t see it catching on with habitués of secret dinning clubs but on a weekday morning before a romp in the Mojave, and especially with a side order of sausage, it was just what the desert rat ordered. 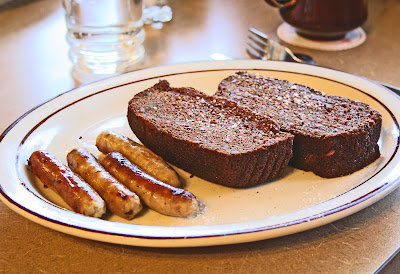 Posted by GeoffNIcholson at 6:55 PM