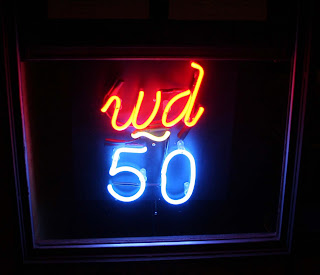 So we went to New York and, among other things, we ate at WD-50, home of Wylie  Dufresne’s brand of molecular gastronomy, though he prefers not to call it that. The restaurant is in a part of the Lower East Side where not so long ago no sane person would dare set foot.  Now it’s a desirable area and there were a bunch of bars and restaurants near to WD-50 that looked very inviting. 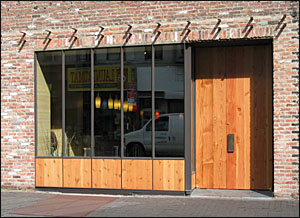 WD-50 itself was austere but very welcoming, especially the staff, and our waiter was very keen to know if we were allergic to anything: the first time I’ve ever been asked that in a restaurant.  It was tempting to say, “Only to deconstruction,” but I resisted.
It seemed that everyone around us was having the tasting menu.  Call me a fool, but I never enjoy tasting menus.  They seem to contain the components of a meal without being an actual meal, as if you went to see a band play and instead of performing actual whole songs, they just played tiny, one minute snatches of their greatest hits. Ok, no doubt some bands do precisely that.
So the Loved One and I each had a starter and a main course (not being huge fans of dessert) and we were glad we did, because looking around at the other tables, it seemed as though the menu-tasters were being served small smears of something or other on tiny plates. 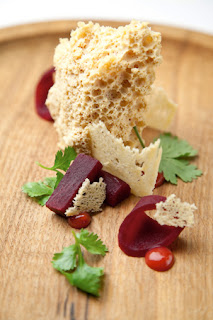 For starters we had aerated foie with plum jam and sliver of pickled beet, and  peekytoe crab in a hotdog bun.  Then there was duck breast with black sesame dumplings, and Iberico pork with spaetzle.  In each case there were plenty of other ingredients too.  I didn’t take pictures of the food because I didn’t want to appear like a rube, or worse still like a blogger, but the Internet shows that others have had no such inhibition. 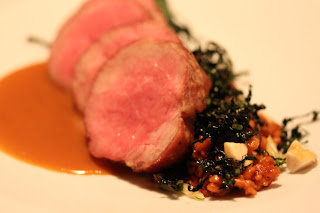 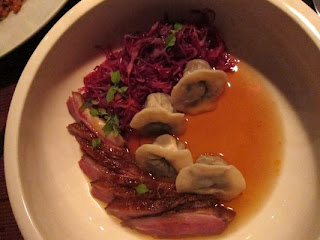 It was absolutely great.  I don’t know if this is a measure of whether we chose badly or well, but our meal lacked most of the knee-jerk molecular bells and whistles, and was decidedly light on the liquid nitrogen and the spherification.  But the one thing that absolutely stood out - and it was a small thing in its way - the peekytoe crab came with “salt and vinegar chips,” miniature potato chips the size of a cornflake and so rich and subtle in flavor and texture that you wanted to eat a pound of them.  I couldn’t help thinking that there are chefs in the world who could base entire careers on those things. 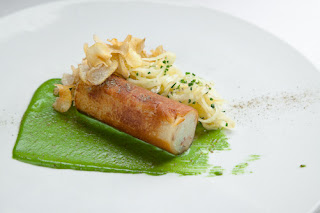 Actually, one of the most impressive things abut WD-50 was that you could peer into the open kitchen and there, quite visible was Wylie Dufresne, working steadily and unobtrusively.  It’s always good to know that the big name chef is actually in the kitchen, and not off doing some reality TV show.  And best of all, he didn’t come out and work the room for applause, the way certain celebrity chefs insist on doing. 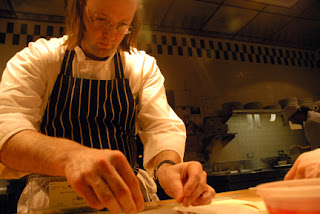 But if you want evidence of just how far and wide this whole molecular business has gone, on our last night, wandering happily and without great expectations around the Flatiron District, we happened to find an appealing looking restaurant called Gravy.  We knew nothing about it but I now know that it describes itself as the “first New Southern restaurant in New York City.”  And here, as well as the grits and the gumbo there were some decidedly molecular touches.  The crab bisque came with a fennel foam, the Long Island duck came with an egg cooked sous vide. 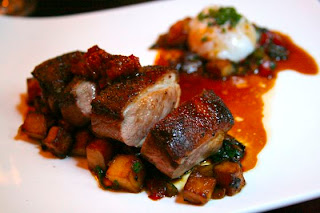 Both foam and egg (and indeed the bisque and the duck) were perfectly good but you couldn’t help thinking they were the modernist equivalents of the carved raddish and the tomato rose: fancy little touches that didn’t have much to do with the real business of the food.  None of this, I hastily add, applies to the cooking of Wylie Dufresne.  When he cooks, he seems to really mean it.
Posted by GeoffNIcholson at 12:04 PM