NAKED AT THE SCREENING 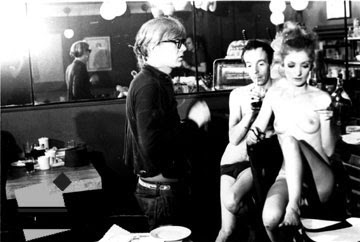 These are strange, virtual days indeed.  There was a time, not so long ago, when if you wanted to see any of the early Andy Warhol movies you had to go to the ends of the earth, to some dank “art space” or “film co-op” in a bad part of town.  I went eagerly to such places, and of course I admit that the difficulty, the seeking out, was part of the attraction, but I never managed to see Nude Restaurant.  That’s it above and below. 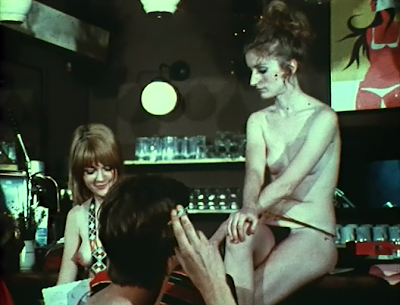 But now, as I have just discovered, you can go on Youtube and, at the click of a cursor, watch Taylor Mead and Viva in Warhol’s Nude Restaurant, and I have to say I’m rather charmed by the pair of them.   I suppose Viva and Taylor were never exactly going to be Hepburn and Tracy but at least in Nude Restaurant Viva seems to be trying vaguely to stick to the subject. 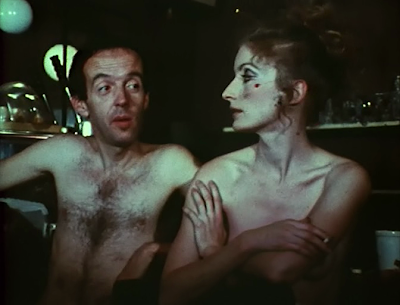 She talks about going to a restaurant on a date, “this horrible, horrible expensive rotten ... something like the Delmonico Grill” where she “isn’t aware of the procedures” and she orders clams on the half shell which come with lemon slices wrapped in gauze, and because she’s stoned the lemons look “like a little baby bunting ... like Christ in his swaddling clothes.”  Then she goes off on a tangent about who was the real author of The Story of O. 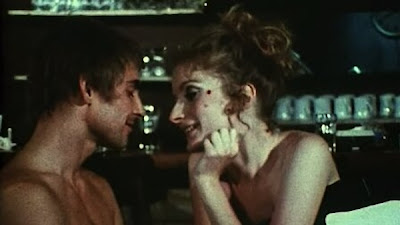 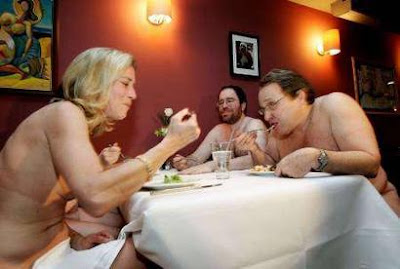 A quick cruise around the Internet reveals that there are quite a few “nude restaurants” in the world.  The one above is, or was, in New York, but they seem to me everywhere.  I have only ever been to one nude restaurant, at a clothing-optional swinger’s resort in Florida.  It was literary research, OK?  The people there seemed content enough, and in fact after I’d been there about ten minutes I felt pretty much the way I would feel in any in any not so good restaurant anywhere in America.  Which makes me wonder why make a big deal of it?  But chacun a son gout, as they say.
Personally I think the kitchen is a far more erotic place than a restaurant.  It’s a little more private for one thing, though I know that not everybody demands privacy.  Also, if you insist on cooking naked, it’s more potentially dangerous, with the flames, the boiling water, the spitting fat and so on, and again that may add to the thrill. 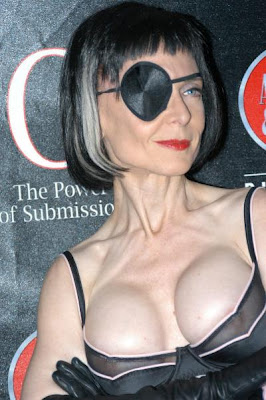 Once in a while I see the (ahem) sex educator Nina Hartley (that's her above) in my local supermarket.  I suppose as a true psychogourmet I should have peered into her basket by now, to see exactly what she buys, but maybe that would be a little too creepy. 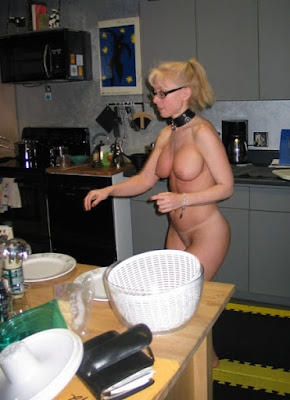 However, as you see above, there are some extant images of Ms, Hartley in her own kitchen, making a salad.  Far and away the most fascinating thing in that kitchen is the essoreuse - I’m not sure there’s a good English word for it – it’s the white cylindrical thing on the corner of the counter, a thing that spins round and you use it to dry salad leaves.  Looking at this picture I realized I hadn’t seen an essoreuse for years.  Maybe nobody washes their salad leaves any more.  Or maybe they just don’t dry them. 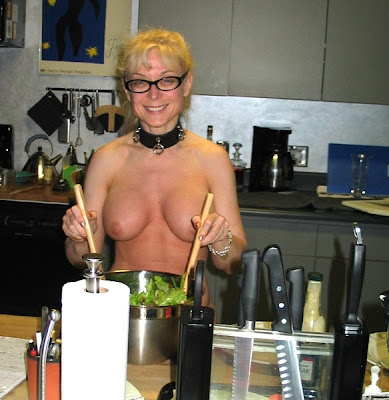 But if you’re really looking for cheap, zesty sexual thrills in the kitchen, a salad really doesn’t cut it.  You need a sausage.  Now a sausage is a vaguely lewd and phallic thing in the first place, but if you cook it in the nude you’re guaranteed to get some big, cheap, slapstick laughs.  Only one each, girls!!! 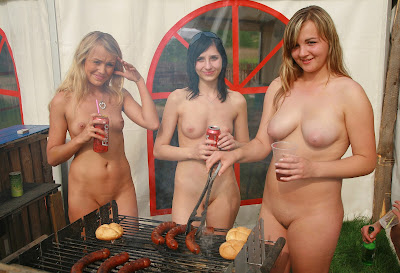 Incidentally, Warhol also made a movie called Kitchen.  I confess I haven’t seen that one either, neither in a dank art space nor on Youtube, but as far as I tell from the descriptions, it contains neither nudity nor sausages.  Shame. 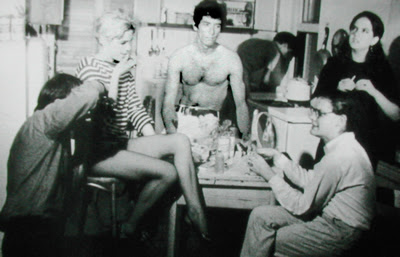 Posted by GeoffNIcholson at 7:15 PM