THE OTHER PINK MEAT 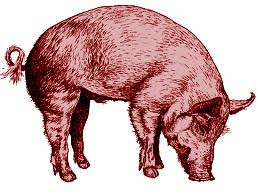 So the USDA in its infinite wisdom has set down new guidelines for the cooking of pork.  Now, they tell is, it’s OK to eat it cooked to an internal temperature of 145 degrees (down from 160) which will mean the end result may be slightly pink.  This in fact is the way I’ve been cooking pork for years, and a quick look around internet responses to the USDA guidelines suggests that one set of cooks were with me and had already decided a lower temperature was perfectly safe, while another set is going to continue overcooking their pork regardless.
The USDA website contains what they describe as a fact sheet, with the question “What is pork?” and they give a surprisingly interesting answer.  “Pork” they say “is the meat from hogs, or domestic swine. The domestication of "pigs" (immature hogs) for food dates back to about 7000 B.C. in the Middle East. However, evidence shows that Stone Age man ate wild boar, the hog's ancestor, and the earliest surviving pork recipe is Chinese, at least 2000 years old.” 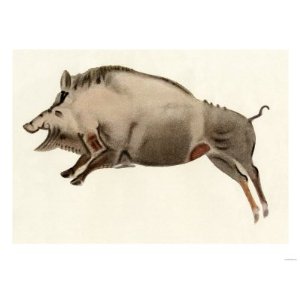 This may not exactly be news to culinary scholars, but it seems rather more than you’d expected from a government website.  And there’s lots more info there too, including the reasons why pork is a “red meat.”  Because, they say, “Oxygen is delivered to muscles by the red cells in the blood. One of the proteins in meat, myoglobin, holds the oxygen in the muscle. The amount of myoglobin in animal muscles determines the color of meat. Pork is classified a ‘red’ meat because it contains more myoglobin than chicken or fish. When fresh pork is cooked, it becomes lighter in color, but it is still a red meat. Pork is classed as ‘livestock’ along with veal, lamb and beef. All livestock are considered ‘red meat.’” 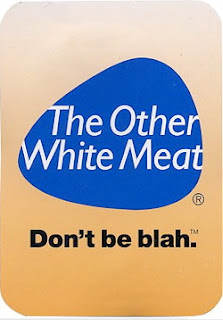 Well this is probably bad news to people who wanted to consider pork the “other white meat,” but who ever really believed that? 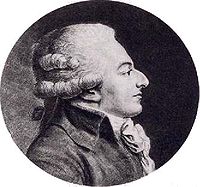 Of course I think about pigs often enough, with or without encouragement of the USDA, but I’ve always been thinking about them even more lately having acquired a copy of Giles MacDonogh’s book A Palate in Revolution, a study of Grimod de La Reyniere (that's him above), who is one of the first, arguably the first, professional food writer and restaurant critic, who published his Almanach des Gourmands in 8 volumes between 1803 and 1812. 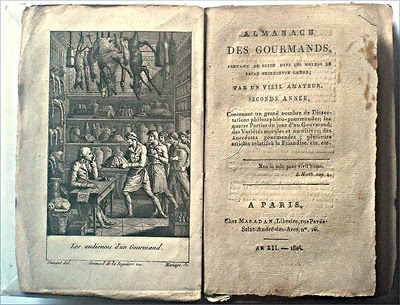 As a young man Grimod gave grand dinner parties in the family home during his parents’ absence.  When his father returned unexpectedly on one occasion to find a pig dressed up and presiding at the table, he disowned his son and sent him off to an abbey near to Nancy, where by Grimod’s own account he actually discovered the true joys of eating.
Having a pig at the head of the table would have had a particular  significance for Grimod.  He was born without hands.  He had a claw at the end of his left arm, a webbed pincer on the right. His parents, wishing to assert there was no genetic taint in the family, claimed this was not a deformity but an injury sustained when the young Grimod had fallen into a pig pen.  In later life he had artificial hands fitted and encased them in white, possibly pig skin, gloves.  The image below, may be Grimod again, nobody's sure, but if so they've obviously made the hands look extremely lifelike. 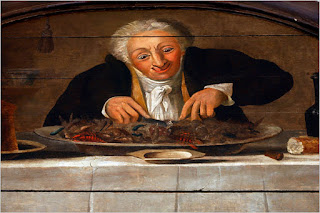 One of Grimod’s favorite culinary japes was to stand with his false hands pressed against an exceptionally hot stove.  Those who saw this, and didn’t know about the artificial hands would assume the stove couldn’t be very hot, and so pressed their real flesh and blood hands against it.  With hilarious consequences. 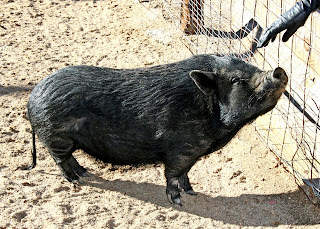 The picture above was taken in Pioneertown in the Mojave desert, not so long ago.  It shows a fine looking pig, Vietnamese, I think, pot-bellied very possibly.  The hand belongs to the Loved One.  The glove is made of kid, not pigskin.  We are not monsters.
Posted by GeoffNIcholson at 3:56 PM