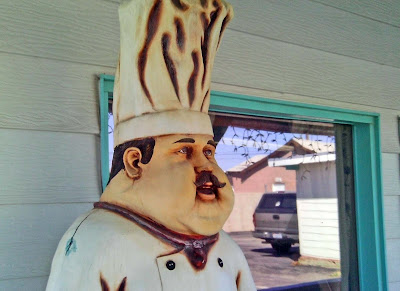 We’ve been away on one of our desert road trips: driving, walking, poking around, taking amateurish photographs, staying in so-so motels.  This one was comparatively short, just a week in the Mojave, from LA up as far as Trona and Olancha, and turning back before we got to Death Valley.
Now, nobody in the right mind goes to the desert expecting great gourmet adventures, and there was a time when I used to just buy food from the nearest convenience store and take it back to my motel room, but these days that seems a bit lame and so lately I’ve been eating out, in whatever local places seem promising. 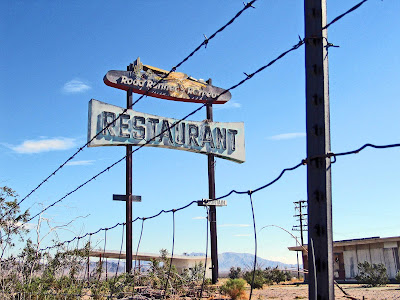 What’s more, the Loved One had a memory that the very best biscuits she’d ever eaten were to be had at the Carousel restaurant in Twentynine Palms.  She remembered them as superbly fresh, large, crispy on the outside, rich, dense and melting on the inside.  She would have them again: I would have them for the first time.
But that was obviously a morning thing and we arrived the night before so we needed dinner, and blow me down - Twentynine Palms now has a bistro: called Bistro Twenty Nine. 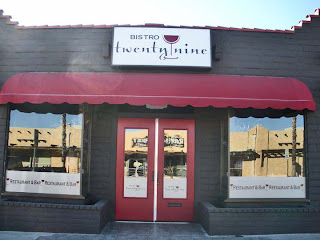 The place even has a kind of mission statement.  “Welcome to Bistro Twenty Nine, a locally owned and operated restaurant featuring fresh and seasonal cuisine in a friendly, informal ambiance.  The Bistro features a large wine list with numerous grape varietals to pair with your meal …” and so on.
It’s a place that would pass unnoticed in any big city, and frankly the food wasn’t all that exciting, though the wine was fine, and in Twentynine Palms it seemed a kind of miracle.  The décor was fancy, some officer class marines from the nearby base were entertaining their dates, and in the bar there was a man in a blue corduroy utility kilt.  We had a very good time. 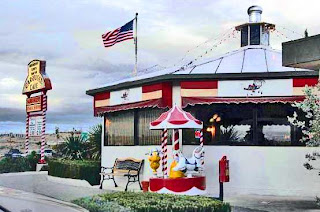 Next morning we went to the Carousel for the biscuits, and the Loved One was terribly disappointed.  They were a bit stale she said, like they’d been made the night before.  I couldn’t tell whether mine were stale or not since they came with bacon and scrambled eggs and were submerged under a tidal wave of gravy.  Gravy covers many sins and certainly softens up day old biscuits, and in any case it was pretty much what anyone might need to set himself up for a day in the desert. 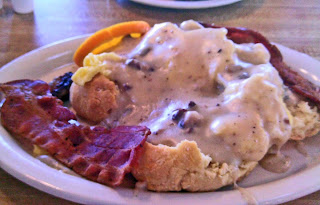 Also in the Carousel there was this wonderful handmade poster on the fridge (which contained gallon bottles of wine). 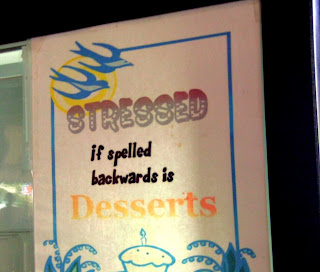 Now, call me a fool, and maybe everybody already knows that dessert spells stressed backwards, but I definitely didn’t.  I thought it was brilliant. 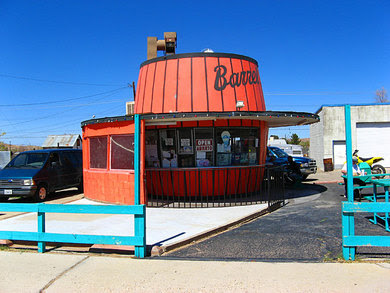 In Boron we were disappointed to find that the Barrel restaurant was closed, though still in business as far as we could tell.  The Barrel is a wonderful bit of programmatic roadside architecture.  The picture above is from mytravelguide.com, and was obviously taken in better times.  It looks a little faded these days but anything would fade in that Mojave sun.
Far less faded, just a little way down the road, also in Boron, was an unnamed cafe with these paintings on the windows. I do have a special love for restaurants that display painted pictures of food.  This compare and contrast of Mexican and American trios is one of the best I’ve seen. 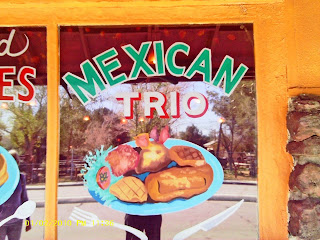 At Kramer Junction there was the wonderful Astro Burger (no connection to the one in LA with the same name as far as I can tell), another piece of Americana, a great advertising sign, eat in or eat outside, and where I enjoyed an Astro Melt, a fried sandwich containing breaded chicken breast with avocado and bacon.  They’d got the oily crispiness of the bread just right. 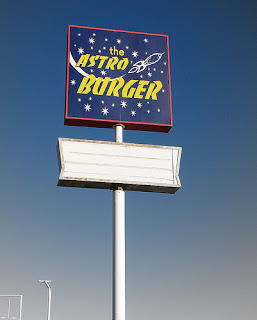 One of the strange things I find about being on a road trip, is that I get a taste for jerky.  In my real life, years can go by and I live very happily without it, but put me behind the wheel of a car and the craving comes on.  So when we saw a sign saying “really good fresh jerky 32 miles” in Olancha, well obviously I put my foot down. 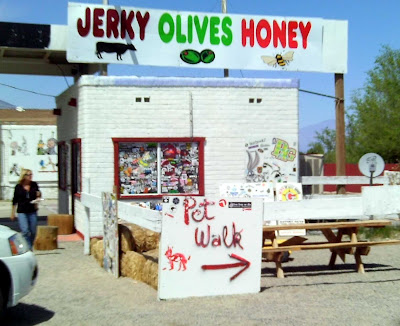 There, in a former gas station was a small jerky operation attributed to “Gus.” He also has a store in Kingman, Arizona, apparently.  We had the sweet and spicy jerky, which actually was really good, but I can’t help thinking that what really made it worth a long drive were the terrific, and copyright infringing, paintings on the outside wall, such as this one. 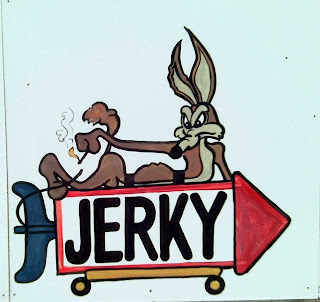 After Olancha we drove down to Inyokern, a small desert town (355 days of sunshine a year – the highest in America) a place that seems to be struggling but is nevertheless surviving.  It was the day before we came home, and despite the reputation for sunshine, the temperature was dropping and rain was threatening, and we found ourselves at about 3 in the afternoon, looking for something to eat, and we found the Torres Steak House. We were the only customers in the Torres but we were made very welcome by the waitress and I ordered a Tri-Tip hoagie with steak fries.  It turned out to be the single best meal we had all trip. The hoagie was perfectly good, but it was the steak fries that absolutely, completely blew me away.  They were big and flat, golden, crisp on the outside, melting on the inside, and as I now remember them, they’re the best fries I’ve ever eaten in my life. 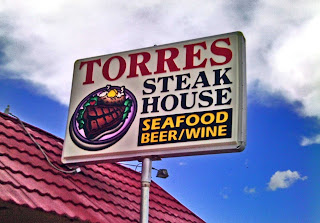 When I got home, I looked up the Torres Steak House online, and I see it’s for sale because of ill health.  I did notice that the waitress had a heart surgery scar on her chest (just like the one my mother had).  And it seems she’s not just a waitress, her name I think is Francis Torres, who owns the family business with her husband.  Alas I don’t know the name of the tattooed young guy who cooked the steak fries.
Now, as with the Loved One’s biscuits, I would fear going back to the Torres Steak House in case it wasn’t as good as I remember.  Knowing that the place may soon be under new ownership suggests that it probably couldn’t happen anyway.  This seems a deeply melancholy fact in some ways, but that’s how many things are in the desert: things fade, things pass, which only intensifies experiences.  And maybe it’s better not to go back.  As with biscuits, so with steak fries.  And in the sense that you can’t jump in the same river twice, maybe you can’t go to the same restaurant twice.  Maybe you shouldn’t try to relive the perfect food moment.  Maybe the best steak fries always exist most fully in your own memory. 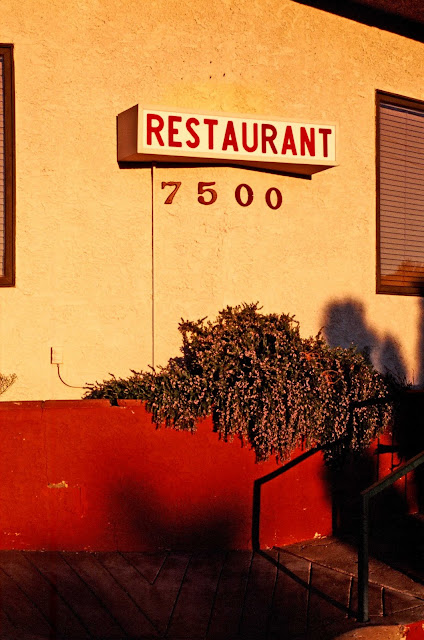 Posted by GeoffNIcholson at 11:28 AM