All food establishments face the problem of attracting customers. An eye-catching sign is one simple, folksy way of doing it, and as I wander around Los Angeles I’m drawn to signs showing an “artist’s impression” of the food on sale inside. Of course this image may not have a lot to do with reality, but I suppose that’s what makes it art.

I’m always impressed by the sign above Pink’s on La Brea. 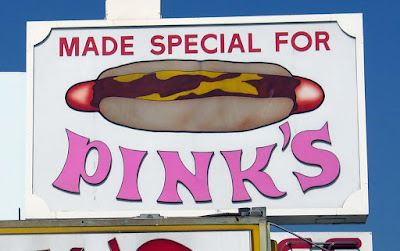 Admittedly the bun looks kind of two-dimensional, and that thing that’s wrapped around the dog looks a little weird, like psychedelic camouflage, but the dog itself – wow. It has an airbrushed sheen to it, it looks metallic, futuristic, like space food. If Pink’s really sold hotdogs like the ones on the sign I’d be in there every day.

The other, as it were, “mainstream” sign that amazes (and actually really disturbs) me is the one for Wacky Waffles on Sunset Strip. 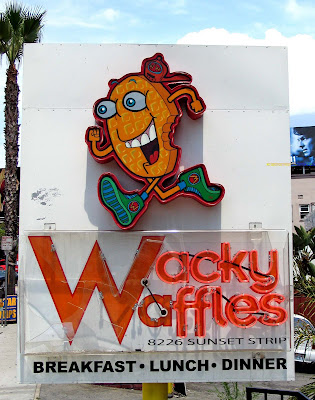 OK, I suppose I can accept an anthropomorphic waffle with arms and legs and eyes and teeth (though I sure wouldn’t want to find any of those things in my waffle), but what really alarms me is the huge bite that’s been taken out of our lovable pal. Worse still, the tooth marks in his side seem to match his own teeth fairly precisely. Either he’s taken a bite out of himself, or he’s had a run in with some other anthropomorphic, and in fact cannibalistic, waffle. I’m not sure that’s totally appetizing, but others will surely feel differently.

Still, the illustrations I like best are the odder, more eccentric, more homely ones. 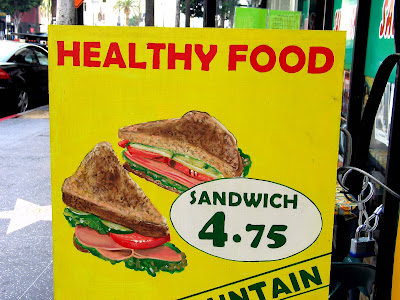 I think this painting seen outside a sandwich store on Hollywood Boulevard is really very fine. That bread looks grainy and nutritious, the tomatoes have a nice gloss to them, and yes, maybe the ham looks a little store-bought, but to be able to depict store-bought ham convincingly strikes me as quite an artistic achievement. And, as the sign says, it’s healthy too!

Now, I’m no artist, but I’d imagine that depicting Mexican food must be quite a challenge. It often consists of various gloppy mounds, and it can’t be easy to depict them in a way that distinguishes one from another. 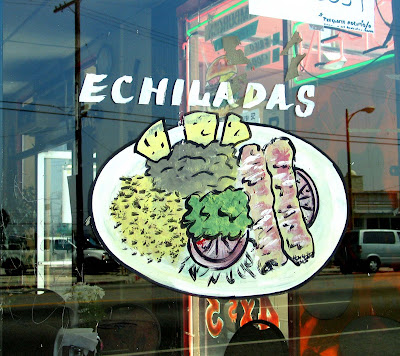 The artist here at a restaurant in Silver Lake hasn’t entirely solved the problem – I mean I’m not really sure what each of those sketchy blobs represents, but nevertheless there’s a certain exuberance about the image, a sense of energy. Heck, you can even see the brush strokes. It looks like eating here might be fun. If you happen to be passing and you’re in the mood for an enchilada, why would you go anywhere else?

And here is the saddest bit of food art I know, from the Norword market, a Mexican grocery store on the edge of Little Armenia. 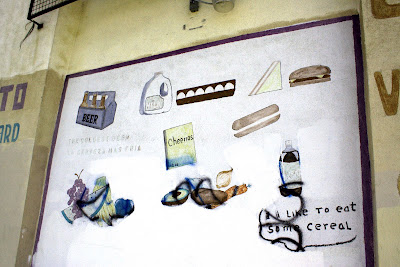 All right, it probably isn’t great art, not even great naïve art, and yet I find myself strangely moved by these simple, in some cases almost diagrammatic, depictions of beer, Cheerios, a sandwich and a hot dog (at least I’m pretty sure it’s a hotdog). And that image of the eggs, it’s so perfectly, beautifully simple. Here we see an artist doing his or her best with what are, let’s face it, extremely limited talents.
And then some scumbag has come along and sprayed graffiti all over it; some rather short scumbag it appears since he could only reach the lowest illustrations. Philistine. Still, I guess that’s how it is with art, some people are just never going to get it

ENDS
Posted by GeoffNIcholson at 1:40 PM